One hundred and fifty years ago today, President Abraham Lincoln stood before a crowd in southern Pennsylvania and began a speech with the words, “Four score and seven years ago…”

The Gettysburg Address, about two minutes long, is one of the most famous speeches in American history. 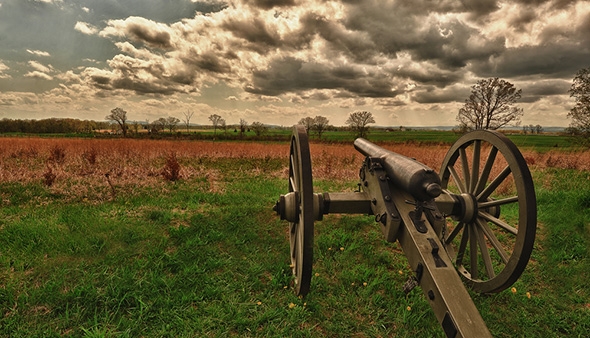 On November 19, 1863, at the site of the famous battle, President Abraham Lincoln delivered the Gettysburg Address. (Photo by Shutterstock)

Associate Professor of History Leslie Butler notes that the speech is part of a canon of sacred American documents.

“In under 300 words, Lincoln did so much more than dedicate the battlefield at Gettysburg; he attached meaning to the still-raging conflict by framing it as a narrative of freedom and rebirth,” says Butler. “It’s amazing, given the speech’s compression and brevity, just how much cultural, political, and national work it was actually doing. The fact that we largely read it today as commonsensical, almost boilerplate, is proof of Lincoln’s brilliance and effectiveness as a communicator.”

Dartmouth’s Joshua Compton, senior lecturer of speech at the Institute for Writing and Rhetoric, considers the address a beautiful example of how short messages can be profound.

“Read the speech aloud,” he says. “Listen for how the cadence and the writing reflect the mood, the context of the speech. When we write speeches, when we write something to be heard, we should keep a listening audience in mind. This is a great example of a speech that invites an audience to listen, and later, to remember.”

The speech was delivered on November 19, 1863, about four-and-a-half months after the defining battle of the Civil War. Massachusetts Senator Charles Sumner, a contemporary of Lincoln’s, wrote that the Gettysburg Address was more important than the battle, because ideas are always more important than battles.

“In the modesty of [Lincoln’s] nature he said ‘the world will little note, nor long remember what we say here; but it can never forget what they did here.’ He was mistaken. The world at once noted what he said, and will never cease to remember it,” Sumner wrote.

Among the troops to whom Lincoln paid tribute that day was Lt. Frank Haskell, Dartmouth Class of 1854. Haskell, who helped defend Union entrenchments during Pickett’s Charge, gave one of the most thorough accounts of the battle in a letter to his brother. Haskell was killed leading a charge at Cold Harbor, Va., less than a year after the Battle of Gettysburg.

Today, the Gettysburg Address is carved into stone at the Lincoln Memorial in Washington, D.C.