Sophomore year is, in many ways, a time for undergraduates to begin making the kind of academic, social, and personal decisions that form the roadmap for their entire Dartmouth career and beyond. 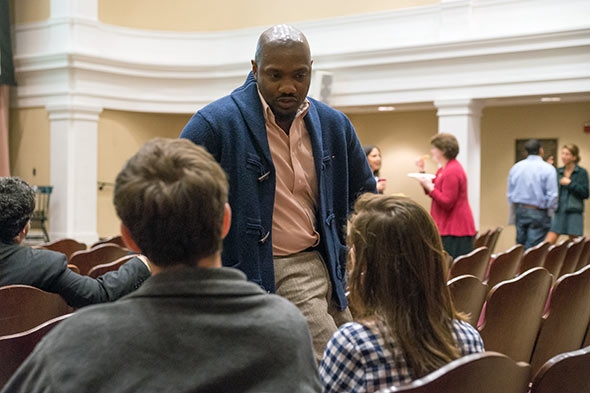 Paul Buckley, assistant dean of undergraduate students, chats with two sophomores at a gathering of Advising 360 program participants. Buckley is the advising dean for students in their second year. (Photo by Eli Burakian ’00)

That is why the College is looking for ways to offer more support during this critical period.

Cecelia Gaposchkin, associate professor of history and assistant dean of faculty for pre-major advising, and Inge-Lise Ameer, senior associate dean of the college for student academic support services and campus life, are directing a trial project called Advising 360, with a team of faculty, undergraduate deans, and undergraduate advisers. The program, which started last year with a group of ’16s, follows new Dartmouth students through their first two years to the declaration of their major, when they connect with an adviser in their major program.

The first group of 100 members of the Class of 2016, and 100 of this year’s ’17s, have been matched with an adviser, with whom they will stay in touch through their first two years. As the program continues, each of the 10 advisers who have volunteered to be part of the program will be matched with 10 first-year students and 10 sophomores.

For the rest of Dartmouth’s students, the existing advising program welcomes first-year students and offers advice from many quarters when they arrive. They hear from faculty, deans, and peer mentors in formal and informal settings. They are briefed on where they can find answers and urged to explore the many options Dartmouth offers.

Then, during sophomore year, when students begin thinking about a field of study and consider options such as foreign study programs (FSP) and language study abroad (LSA) programs, their assigned adviser is their designated undergraduate dean. In addition, the Dartmouth Plan of four academic terms requires that most sophomores move to a new housing arrangement, bringing with it a new set of friends and peers, Gaposchkin says.

The goal of the new program is to offer increased support and guidance at a time when Dartmouth students are making important decisions, Gaposchkin says.

“It is clear to me that the second year is the springboard for what a student’s academic career is going to look like,” she says. “At the moment, many students don’t realize this as they make decisions that shape their future experiences.  What we are trying to do is foster an advising program that will encourage—or even require —students to make intentional decisions in the second year and beyond.”

“Our faculty and our student affairs professionals have different sets of expertise to offer our students, and what we want to do is to create a system where we coordinate that expertise so that, from the perspective of the student, the system can advise the whole student,” Ameer says.

Sophomores have to look ahead and ask themselves a number of questions: Are they pointing toward research, and in what field? Is foreign study a goal? Are there scholarships they can apply for? At the same time, students are becoming more involved in the Dartmouth community and facing decisions about service commitments, Greek life, and other questions related to personal development, Gaposchkin says. Advising 360 offers increased consistency in advising through the team that assists with both academic and student life issues.

This fall, the ’16s who started with the project last year began their sophomore year with the same advisers. The pilot is expected to run for four years initially, but may be extended.

Kathryn Waychoff ’16, one of the first students in the pilot project, says her 360 adviser is engaged and consistently reaches out. She noticed at the start of her sophomore year that this connection to a faculty adviser was helpful.

“We’re scattered all over after all living together last year,” she says. “You tend to turn to upper-class friends more now,” she says, adding that the connection she has with her Advising 360 adviser offers another voice in making decisions about the future that friends who are not in the program may not have.

Buckley says the Advising 360 program has a “wonderful emphasis on faculty advising.”

He says his message to sophomores is consistent: “Focus. While you become more comfortable at Dartmouth, don’t become complacent on the journey—academically, socially. Learn from leadership opportunities. Focus in with friends who have the same drive and academic values.”

John Pfister, adjunct senior lecturer in the Department of Psychological and Brain Sciences, is an adviser in the program. He says he has already seen evidence that Advising 360 students are seamlessly incorporating their faculty connection into their Dartmouth experience.

“We can measure success in all sorts of ways—GPA, how often advisees turn to you, the developing mentoring rapport,” he said. “Success may also be that a student has a faculty member who knows them and can write that recommendation for an FSP or an LSA, or provides another voice to counter the chatter they hear around from peers.”

At the start of the semester, eight of his 10 advisees checked back in with him at an informal gathering, the other two emailed to say they wouldn’t make it.

“For me, this is pay dirt,” Pfister says.