Amber Porter ’14 Gets a Big Opportunity in ‘Big Love’

Amber Porter ’14 is not your typical theater student. A theater major modified with leadership, she has been involved in every main stage production since her first year at Dartmouth, though never as an actor. From stage managing to operating the light booth, Porter has always been backstage, making sure every performance runs smoothly. 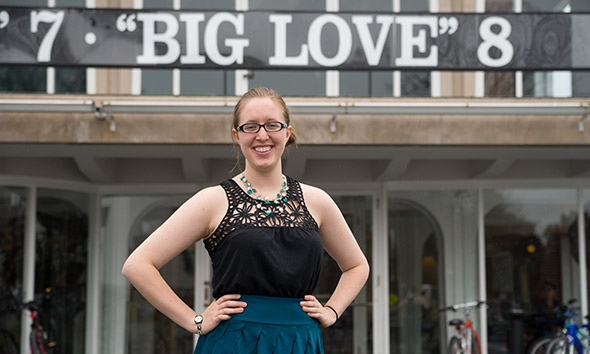 “The theater department at Dartmouth is wonderful, and the fact that professors allow every individual to pursue their passions is inspiring,” says Amber Porter ’14. (Photo by Eli Burakian ’00)

This year, she’s taking on her biggest role yet, as assistant director of the current Dartmouth Department of Theater production of Big Love, which runs through November 17.

Porter has always been interested in producing and casting, so when she found out the production of Big Love did not have an assistant director, she jumped at the opportunity to work with Visiting Professor Tazewell Thompson, an Emmy-nominated director.

“Casting is an area that is fascinating to me,” says Porter. “But it’s so hard to learn about because it is such a brief part of a production’s process. I was so happy when Taz said yes.” Although she’d been an observer during auditions and callbacks, Thompson allowed Porter to give feedback during the decision-making process, and afterward asked her to be his assistant director.

According to Thompson, it was a good move. Working with Porter on the show was “a sheer joy,” he says. “She was a major force in the collaborative and support team. It is hard to imagine the production team without Amber.”

Big Love is the story of 50 brides and 50 grooms. The show explores gender stereotypes that exist within society and the importance of accepting everyone, regardless of individual differences. “I was so excited about the show,” says Porter. “Getting to work with a professional director was just an added bonus. I couldn’t believe that I was given this opportunity.”

As assistant director, Porter had a chance to learn how to produce a successful show. She was able to contribute to Thompson’s artistic vision, and was even given the opportunity to run her own rehearsal when he was called away for a meeting in New York.

“During my rehearsal I was able to step away from the fine details, and focus more on acting choices,” says Porter. “Taz wants people to make leaps and trust their instincts. I was able to bring that piece of advice to my rehearsal while asking the actors to think, reflect, and talk to each other. It was a very transformative experience. Taz liked the little changes I made so much that we kept them in the show. Now when I sit in the audience I see my work up there. It’s a great feeling.”

Porter was also in charge of Big Love marketing and outreach, which included talking to organizations on campus about promoting the production.

“Amber was usually checking up on us, really keeping everything in order,” says cast member Zahra Ruffin ’17. “I have to say that was her biggest strength. She was always able to hear so many things from so many different people and easily orchestrate whatever needed to happen next. Taz and Amber worked as one cohesive unit; the production never ran anything other than smoothly, thanks to their ability to always maneuver in tandem.”

When it came time for the show, however, Porter’s job was to take a seat in the audience. Although it was an adjustment, it was “such a freeing experience,” says Porter. It gave her the ability to see the production from a new perspective.

“The theater department at Dartmouth is wonderful, and the fact that professors allow every individual to pursue their passions is inspiring,” says Porter. “Every member of a production is important, whether you are backstage, in the audience, or taking a bow. This is what makes the production’s vision come to life.”

Through her work on Big Love, Amber got a glimpse of what it takes to be a professional director in the theater world.

“Taz was constantly challenging students to stop intellectualizing everything. He wanted us to always trust our instincts, to let go. I may not know what the future holds, but learning to do this in my everyday life is comforting. Through this experience Taz validated my passions, and I know that whatever comes next will be great.”