Just 58 hours after Typhoon Haiyan struck the Philippines, three Dartmouth alumni arrived in Tanauan, an especially devastated town of roughly 50,000 people on the island of Leyte. 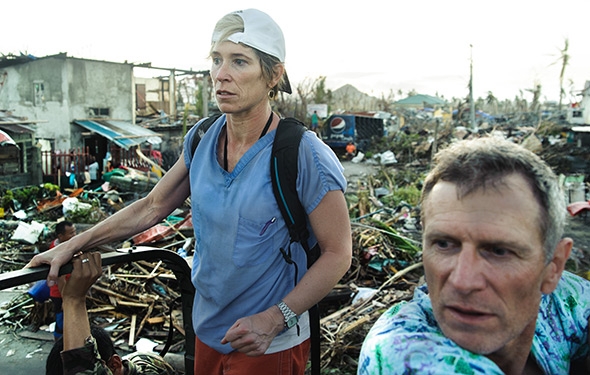 Sara May ’89, an emergency physician, and Jonathan Bourne, an anesthesiologist practicing in Mammoth Lakes, Calif., survey the devastation in the village of Tanauan, on the island of Leyte. (Photo courtesy of Mammoth Medical Missions)

As part of the 16-member group Mammoth Medical Missions, Sara May ’89, an emergency physician, David Page ’90, the group’s chief operating officer, and Martha Kim, MED ’95, an obstetric gynecologist, helped lead a fast-paced, seven-day medical effort that eased pain, buoyed spirits, and saved lives. They were the first people from outside the village to arrive to help.

“NBC Nightly News” covered the group’s effort, and the on-the-ground reporter described the scene this way: “Wooden desks serve as operating room tables, and flashlights as overhead lights. Patients are everywhere. The work is nonstop. Doctors haven’t slept in four days. Upstairs, doctor Sara May from Seattle treats an 8-year-old girl whose leg was cut by flying debris.”

Page, the group’s logistical leader and a founder of Mammoth Medical Missions, was responsible for keeping the group together, safe, and functional. He helped situate the hospital in the town hall. He met every morning at 7 with the mayor, vice mayor, and other officials, who continued to work on the first floor of the partially roofed building. The mayor, Pel Tecson, made daily visits to Tacloban to pick up supplies (including, once, a generator), and Page strategized with him about how to distribute food.

Kim, a graduate of the Geisel School of Medicine practicing in Mammoth Lakes, Calif., delivered more than 20 babies, including at least two by Caesarean section, with the help of four midwives from Tanauan. She told NBC, “We delivered the first baby that night, in the dark, with headlamps, on a desk. That’s how it started.”