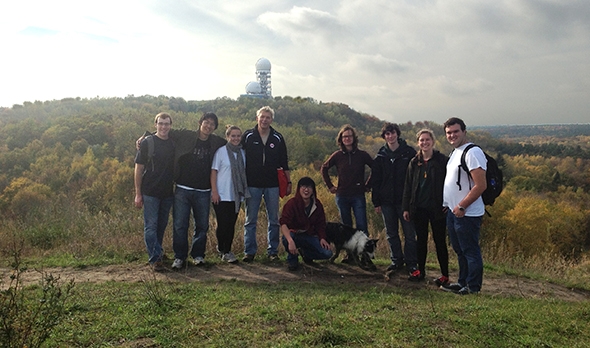 The NSA controversy has been brewing in Germany since the summer, when news broke about widespread international surveillance by the NSA, so the excursion to Teufelsberg had been planned ahead of the Merkel phone scandal.

“During the FSP, students have quite an extensive exposure to the practice of surveillance during both the Third Reich and the GDR (German Democratic Republic), so they do understand why this is a very sensitive issue for Germans,” says Gemünden, Dartmouth’s Sherman Fairchild Professor of the Humanities and director of the fall term 2013 Berlin FSP, for which he also teaches a German theater class.

But as a result of growing international indignation and German outrage over U.S. surveillance, he says, “my Berlin colleagues and I have taught our students a bit more about the work of U.S. intelligence in Berlin, including during the Cold War. So I think our students are in a unique position to understand all the complexities as they play out here.”

Alex Ganninger ’16 proposed the visit to the former NSA site and gave a presentation at Teufelsberg, formerly one of the NSA’s largest listening stations. Completed in 1963, it ceased operation after the fall of the Berlin Wall in 1989. The rundown property is now owned by a private company, which is redeveloping the site and only occasionally offers tours of the buildings. The FSP’s seven students therefore viewed the grounds from outside.

“The listening station, even from afar, appeared eerie, with the dilapidated radar domes,” says Ganninger.

Ganninger was intrigued by the fact that Teufelsberg is visible throughout most of Berlin, making “the listening station an ever-present reminder of America’s deep involvement in Europe, and that the United States was permanently observing East Germany from within its own territory.” And with the recent NSA news, he says, a visit to Teufelsberg “struck me as oddly prescient, as the government had already begun an extensive surveillance program in Germany some 30 years ago.”

Nate Greabe ’16 echoes his classmate’s sentiments. “When we saw the Teufelsberg on Saturday, it just reminded me that we’ve been using our best technology to do espionage here since the beginning of the Cold War, and it would be naive to think that we weren’t still doing so. But tapping Chancellor Merkel’s phone is obviously going too far.”

Adding to the richness of the FSP instruction are Veronika Springmann, who teaches the FSP’s German cultural studies course, and Keith R. Allen, who teaches the history course. Allen recently published a book in Germany, Befragung, Überprüfung, Kontrolle: Die Aufnahme von DDR-Flüchtlingen in West-Berlin bis 1961, about how East German refugees provided information to the Allied intelligence service in West Germany during the 1950s and ’60s.

Greabe says they’ve talked extensively in class about “the deep connections that America has had to Germany in the aftermath of the Second World War and throughout the Cold War,” and about how news reports make it clear that “there is really just a general sense of betrayal, since the Germans really consider America a close ally.”

Annelise Sauter Ortiz ’16 says the faculty has done a good job of tying current events to the coursework and class discussions.

“As our history professor showed us today, it is interesting to see how German figures who previously would never have said something against the United States are now so openly questioning it,” she says. “An example of this is from Bavarian Economics Minister Ilse Aigner, who said, ‘We should put the negotiations on a free trade agreement with the USA on hold until the allegations against the NSA have been resolved.’

“However, breaking stories like this make the classroom even more exciting because we try to predict what direction the story will take based on what we have already learned,” says Ortiz.

Gemünden says foreign study is a great way for students to “broaden their horizons and to have new experiences.” And trips like this one that overlap with historical events make the value of studying abroad even more apparent.