That has become a familiar phrase in 2013. On November 23, the Dartmouth senior finally won the one title that has eluded her during her collegiate career, winning the 2013 NCAA Cross Country National Championship on the LaVern Gibson 6 kilometer course in Terre Haute, Ind., in a time of 20:00.3. 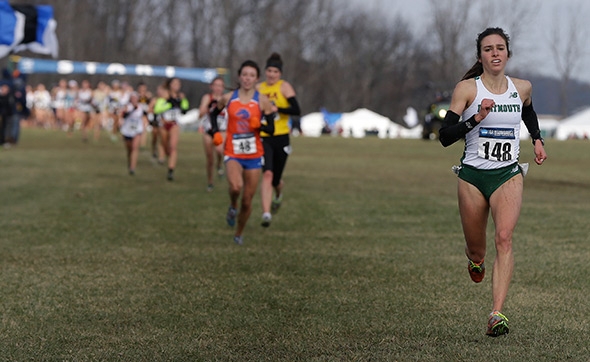 The win gives D’Agostino five national championships in her career between cross country and indoor and outdoor track and field—the most individual titles ever by an Ivy League student-athlete in any sport dating back to 1883.

The Topsfield, Mass., native is the Ivy League’s first-ever cross country champion (on either the men’s or the women’s side).

Since the start of this calendar year, D’Agostino has won four championships—5,000 and 3,000 meters (indoor), 5,000 meters (outdoor), and cross country—two more than any other Ivy League track athlete has ever won in a career.

The now 10-time All-American finished as the runner-up at the 2012 cross country championships and in third place in 2011.

“It was an incredible feeling when I crossed that line,” D’Agostino said. “I woke up this morning with a good feeling and a great deal of trust in myself. Having the team here was a huge difference and the final piece of the puzzle for me this year being able to win.”

In the team standings, Dartmouth claimed 16th overall with 369 points, the best finish by any of the three Ivy League teams competing in the championships. Dana Giordano ’16was the second Big Green runner to cross the finish line, claiming 31st overall in 20:41.1 and earning her first All-America honor.