Dartmouth will commemorate Veterans Day this year with a series of events on campus, including a formal flag retreat ceremony on the Green, a Veterans Day remembrance breakfast, and the second annual Veterans Day Banquet. 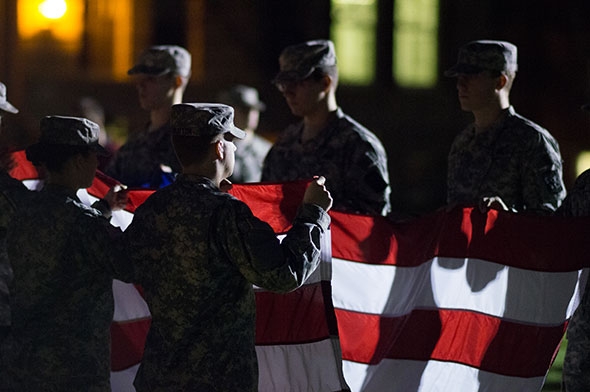 “We are hoping to continue to raise awareness for veterans attending Dartmouth,” says Kevin Price ’14, president of the Dartmouth Undergraduate Veterans Association. “Currently there are only 18 veterans within the 4,000 student undergraduate population. Not all of the students are aware of our presence here, which is why we continue to advocate for more veterans on campus.”

As an Army Ranger, Price served on several tours in Iraq and Afghanistan. The 31-year-old Louisiana native plays football for the Big Green.

The events will kick off with the Dartmouth College’s Second Annual Veterans Day Banquet on Friday, November 8. The keynote speaker will be James Bullion ’78, Tuck ’82, director of the Task Force for Business Stability Operations in the Department of Defense. Registration is required.

Dartmouth College ROTC (Reserve Officers Training Corps) will conduct a formal flag retreat ceremony, which begins at 4:45 p.m. on November 11 on the Green. The ceremony will open with a bugler playing “retreat,” followed by the firing of a 15-millimeter cannon, and the lowering of the flag during the playing of “To the Colors.”

The annual number of Dartmouth ROTC graduates varies. Last year, four members of the Class of 2013 were commissioned as 2nd Lieutenants in the U.S. Army.

Dartmouth’s history of training students for the military dates back to at least 1918, when the College was transformed by World War I. As the nation prepared to send its young men to battle, colleges became active centers for training soldiers. In Hanover, trenches were dug around campus to simulate the battlefield conditions in Europe. For months, students marched in formation on the Green, their bayonets flashing in the sun, before the war ended and Dartmouth returned to its usual educational mission.

Another highlight will be the Veterans Day Remembrance Breakfast, which includes remarks from President Phil Hanlon ’77 and MALS student and veteran Michael Rodriguez; it begins at 8 a.m. on November 11 in the Hanover Inn Grand Ballroom.