Football tri-captain Dominick Pierre ’14 may be quiet and unassuming off the field, but the Fort Lauderdale, Fla., native has made a major statement on the gridiron. During his four-year career, the Big Green running back has scored the most rushing touchdowns (29) of any Dartmouth player since the 1956 creation of the Ivy League football conference. He is also number two in total rushing yards, with 2,526 yards going into the team’s final game against Princeton on November 23. If he runs for 48 yards against the Tigers on Saturday, November 23, Pierre will be the fifth Dartmouth player to gain 1,000 yards in a season. 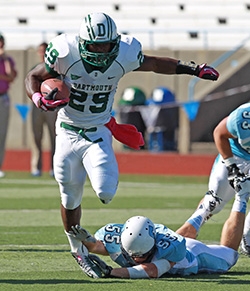 Running back Dominick Pierre ’14 has scored the most rushing touchdowns (29) of any Dartmouth player since the 1956 creation of the Ivy League football conference. (Photo by Bob Mondshine)

The senior sociology major recently sat down for a video interview with Emma Steele ’14, the Office of Public Affairs’ Whitney Campbell intern. Pierre reflects on his Dartmouth experience, talks about why academics are so important to him, and discusses his goals, which include playing professional football after graduation.

Dartmouth Head Football Coach Buddy Teevens ’79 acknowledges that Pierre’s talents would have made him a starter his first year if he had gone to any other Ivy League school. But for his first two seasons, Pierre saw limited action as he played behind Nick Schwieger ’12, the Big Green’s all-time leading rusher with 3,150 yards.

“He didn’t get the carries he would’ve gotten if Nick had not been here, but it didn’t faze him. He was completely unselfish,” says Teevens. “He’s a consummate team player, and a leader in every way with the squad. He did everything to make himself and our football team better.” 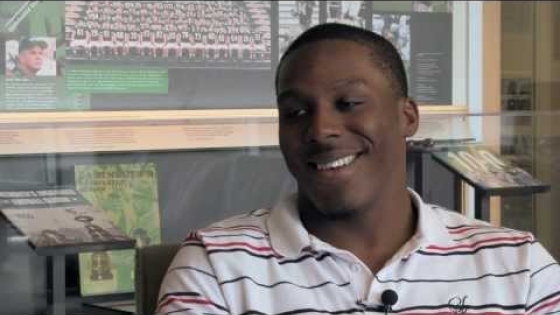 Teevens describes Pierre, who was also one of Florida’s top high school wrestlers, as “a very physical back with natural strength and great balance. And he’s certainly developed himself well. He has very good field vision. He’s a very cerebral player and understands defensive schematics and strategy. And he reacts to what he sees, so he can anticipate cuts and burst through the hole. And he’s a powerful guy, so it’s hard to take him down. He’s always falling forward, picking up yards.” 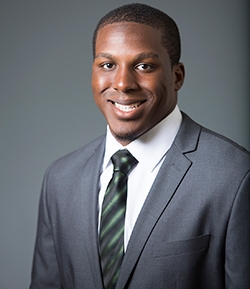 Dominick Pierre ’14, a sociology major, is the first student from his high school to matriculate at an Ivy League institution. (Photo by Mark Washburn)

With the help of Dartmouth Assistant Football Coach Cortez Hankton, an NFL wide receiver for six years, Pierre says he is “putting [himself] out there for different NFL teams,” while also taking advantage of the Athletic Department’s Dartmouth Peak Performance (DP2) program.

“Dartmouth Peak Performance helps me in any and every area, not only with football, but also with academics,” says Pierre. “They help me take care of my body, manage my time, and market myself.”

Through Dartmouth football, Pierre has a found a great family and support system. When he first visited Dartmouth he was struck by the “sense of a home atmosphere. Everyone seemed to be kind and genuine. I loved the coaching staff. It was just a tight-knit group, and I could really see myself fitting in there.”

Not only has he fit in, Pierre has excelled. Teevens says, “We got all the things I’d hoped we would get after meeting him and his mother” during a high school recruiting visit to his home. “He’s thoughtful, considerate, he’s got a great work ethic, a sense of humility, and he goes out of his way to make people feel comfortable,” says Teevens. “He’s a good person who’s a great football player.”

As he prepares for his final Big Green game, Pierre says he will always treasure his memories of Dartmouth football and “being able to wear the same jersey that past team members have worn. My favorite part about being a student-athlete at Dartmouth is playing the sport I love, while getting the great education Dartmouth offers.”