Nina Maksimova ’15 comes from a family of physicists, but her studies took a different direction in high school.

“I was interested in physics as a little girl and I knew I wanted to be an astrophysicist before I even started school, but in high school I got a little off track,” she says. “I didn’t like my science classes that much, so I turned to the study of history instead.” 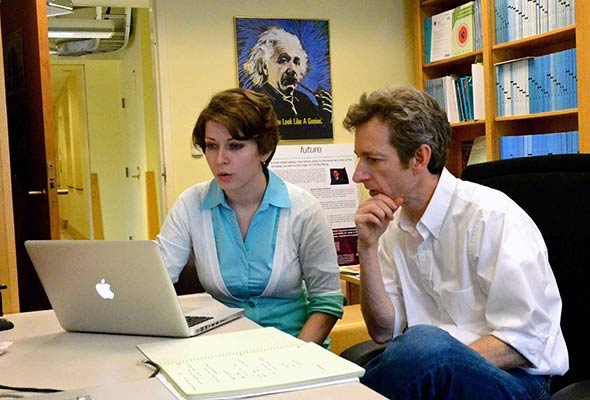 At Dartmouth, academic ambivalence took her back to history, but its romance was gone. Maksimova was homesick, unhappy, and on the verge of leaving the school when she decided to take the advice of an older student. “She told me to take a class at Dartmouth in something I had not enjoyed in high school, because the teaching at the College could very well spark a new interest in it.”

She enrolled in “Physics 13,” an introductory freshman mechanics course taught by Professor Robert Caldwell, and her penchant for science reemerged. “Besides talking about blocks sliding on frictionless planes and all the boring topics that we covered in high school physics, he would often go off on tangents about very interesting things like black holes or cosmic strings or time machines. I remembered why I’d been interested in astrophysics in the first place,” says Maksimova.

Caldwell enlisted her talents in a theoretical cosmology project dealing with the accelerating expansion of the universe. The results of the project are published under their joint authorship in the journal Physical Review D.

Maksimova feels strongly about undergraduates being involved in research. “There were many people along the way that told me that this was a ridiculous idea and the most that I would ever do would be menial stuff, but that hasn’t been my experience at all.

“I think it is a blessing of going to Dartmouth, that undergraduates aren’t ignored. I’ve only ever been met with the greatest patience and outstanding mentorship in my experience with undergraduate research. I think it is something that should be open to anybody who is willing to do it,” says Maksimova, who has been a Sophomore Science Scholar, a Presidential Scholar, and a Wilder Undergraduate Research Fellow, studying physics, math, and German.

“The single most remarkable property of the universe is that it is expanding’’ reads a large sign above the whiteboard in Caldwell’s office. In fact, the 2011 Nobel Prize-winning discovery demonstrated that the expansion is accelerating. “One of the most promising ideas to explain the acceleration is dark energy,” says Maksimova. But, as Caldwell notes, very little is known about the physics of dark energy.

Their work challenges a different explanation for the accelerating expansion. Instead, if the Earth, the solar system, our Milky Way galaxy were near the center of the universe, then the cosmic acceleration might be easily explained without any mysterious dark energy or any new laws of physics. “This seemingly egocentric view violates a standard assumption of cosmology that the universe has no center,” says Caldwell.

“What Professor Caldwell was interested in looking at was whether this model could hold up to other observational tests,” says Maksimova. The sky glows with light left over from the Big Bang, also known as the Cosmic Microwave Background, and that glow has been carefully observed. But “what the model predicts is something completely different from what we see: an extreme high-temperature distortion in the sky.” In other words, the glow the theory predicts is completely contrary to what has been measured. 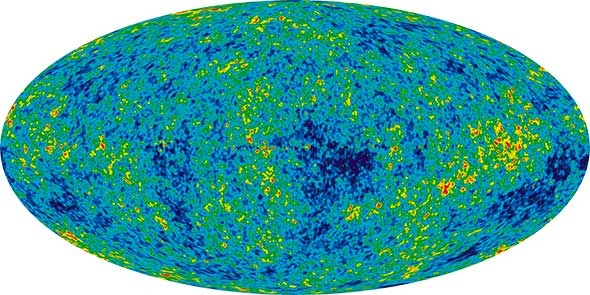 A detailed picture of the Cosmic Microwave Background in the infant universe reveals 13.77 billion-year-old temperature fluctuations (shown as color differences) that correspond to the seeds that grew to become the galaxies. (Photo courtesy of NASA / WMAP Science Team)

“Essentially, Nina and I held a mirror up to the universe and asked if the reflection was special,” says Caldwell. “We do not appear to live at the center of the universe.” Caldwell and Maksimova were able to decisively exclude this explanation for the accelerating expansion.

Caldwell says that their result is an important step in explaining the physics responsible for the cosmic acceleration, but that there are many more paths to pursue.

Maksimova, reflecting on her experiences on this project, says that she enjoys cosmology and theory. “I really delight in what I have been doing. We have started working on another project. I’m getting into it, and it is inspiring.”

In December, she is going to the Texas Symposium on Relativistic Astrophysics in Dallas and will present a poster there. She also plans a presentation at the Conference for Undergraduate Women in Physics sponsored by the American Physical Society, to be held at the University of Chicago in January.