Olmert Says the Time Is Now for a Palestinian State

Former Israeli Prime Minister Ehud Olmert’s November 12 Dartmouth address has sparked a response from the government of his successor, Benjamin Netanyahu, and coverage in “The Jerusalem Post” and other Israeli media.

Speaking to Israeli radio November 17, Minister Silvan Shalom called Olmert’s criticism of Netanyahu from the United States “disgusting,” the “Post” reported. Barak Ravid, diplomatic correspondent for the Israeli daily “Haaretz,” linked to the video of Olmert’s speech posted by the John Sloan Dickey Center for International Understanding, and quoted Olmert’s remarks when he said Netanyahu’s “rhetoric of confrontation and war” was “not smart.” Ravid also noted that the former prime minister criticized the government for “ignoring the signs from the president of Iran, who talks of peace with the West.”

The “Post” story also quoted from Olmert’s Dartmouth remarks: “I heard that the secretary of state of the United States, John Kerry, dared to disagree with the prime minister of Israel. Poor guy. I hope he’ll be all right.”

Now is the time to make peace with the Palestinians, former Israeli Prime Minister Ehud Olmert told as many Dartmouth students, scholars, and community members as he could reach in a single day. 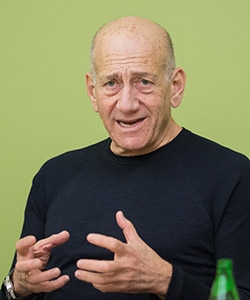 “There is nothing that is more important, more urgent, more essential and more significant for the future existence of the state of Israel than to have peace with the Palestinians,” Ehud Olmert says. (Photo by Eli Burakian ’00)

“There is nothing that is more important, more urgent, more essential and more significant for the future existence of the state of Israel than to have peace with the Palestinians, and to get rid of this cloud that rests over our shoulders and our heads as an occupying power that has deprived millions of people of their basic, fundamental human and civil rights” dating back to 1967, Olmert told an overflow crowd November 12 at Dartmouth’s Cook Auditorium.

This comes from a man who tells of going to his political mentor, Prime Minister Menachem Begin, to say he would vote no, as a Likud member of the Knesset, on the 1978 Camp David peace agreement with Egypt because it included Israeli withdrawal from Sinai.

At Dartmouth, Daniel Benjamin, director of the John Sloan Dickey Center for International Understanding, asked him to explain this shift from hard-liner to centrist critic of the policies of Prime Minister Benjamin Netanyahu and the Likud Party.

Olmert quoted Moshe Dayan, “the famous one-eyed general of Israel, a great guy and a very unusual character. He used to say, ‘Only donkeys don’t change their mind.’ I’m not a donkey.”

He made his case in meetings with students of government and post-doctoral scholars, in conversations with faculty and administrators, and in the Tuesday evening public address, which drew some 500 people from the College and beyond.

These interactions were more complex than the simple sharing of the good news of peace in the Middle East. Olmert joined in intense discussions with more than 20 students and scholars from many perspectives for two hours during a lunch seminar hosted by the Dickey Center and the S. Daniel Abraham Center for Middle East Peace, the sponsors of Olmert’s visit.

Ala’ Alrababa’h ’14, student coordinator for the Dickey Center’s War and Peace Fellows and a citizen of Jordan, noted that during Olmert’s tenure as prime minister, “Israel participated in two wars, in Lebanon and Ghaza, that killed more than 1,000 civilians.  While the large number of civilian casualties can be partly explained by the use of human shields, is it moral to kill civilians in order to kill a Hamas or Hezbollah member?”

Olmert greeted his neighbor from Jordan and began with “Human shields—no one volunteers for this.” And no one wants to kill civilians, he said. “What then shall I do? Allow continued bombing of Israeli civilians out of Lebanon?”

He said many in Israel and in his government “offered to me to return Lebanon to the period of stone.” He said no. “There are not simple answers, the answer is: Stop. Stop fighting. Stop shooting. I’m ready.” 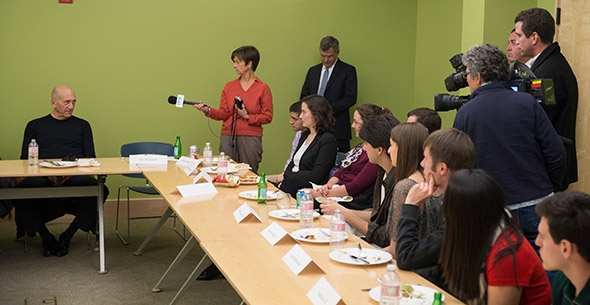 The former Israeli prime minister spoke with more than 20 students and scholars for two hours during a lunch seminar attended by members of the media and hosted by the John Sloan Dickey Center for International Understanding and the S. Daniel Abraham Center for Middle East Peace, the sponsors of Olmert’s visit. (Photo by Eli Burakian ’00)

Zachary Kamin ’14, a Tucker Foundation Fellow who worked with Rabbis for Human Rights supporting Palestinian and Palestine-Israeli communities in Israel, asked Olmert if he supports Israel’s forced relocation of tens of thousands of Bedouins.

He does support the relocations, Olmert said. “Thirty thousand Bedouins cannot take possession of territory that is not theirs.” He defended the relocation to eight settlements where Israel has built 4,000 new housing units, as well as the establishment of a settlement fund worth billions.

Felicia Jia ’16, who worked with the Seeds of Peace Camp, which brings Palestinian and Israeli youths together for summer camp, said after lunch that the time with Olmert was fascinating, calling his statements an arresting mix of positions related to the Palestinian question. For example, she said, Olmert maintains that Israel has absolute historic, cultural and religious claim to all of historic Palestine, and yet is willing to cede land to the creation of a Palestinian State and to share administration of Jerusalem.

“I was surprised at how he expressed elements of so many sides,” she said.

Later, after his address in Cook Auditorium, Olmert acknowledged the presence of protesters and yielded the floor for a demonstration denouncing Israel as an apartheid state and a perpetrator of war crimes. He took questions about Israel’s use of banned weapons during his tenure as prime minister from 2006 to 2009 (he apologized) and about his views on President Obama’s handling of negotiations with Iran (he supports Obama’s effort); and he lingered after his talk to chat, shake hands, hug, or take photos with every person who approached him.

Olmert came to Dartmouth at the invitation of Professor Bernard Avishai, whom Olmert calls his very good friend. Avishai, a visiting professor of government at Dartmouth and an adjunct professor of business at Hebrew University of Jerusalem, met Olmert in the 1970s while writing about Israeli politics for The New York Review of Books.

Avishai’s 2011 New York Times Magazine piece detailing the peace agreement hammered out by Olmert and President Mahmoud Abbas of the Palestinian Authority, is still seen by many, including Olmert and Abbas themselves, as the definitive record of the plan. The deal fell apart while Palestinian negotiators were studying the map of the proposed Palestinian State and Olmert was forced from power amid corruption charges.

In the years since, Olmert has fought and been cleared on several corruption charges in Israeli courts, and he continues to work to clear his name even as he has reemerged as a voice in Israeli politics, Avishai says. Olmert’s visit to Dartmouth and other speaking dates, including at the Brookings Institution’s Saban Forum on the Middle East in two weeks, is an effort to revive that plan, which many say is as close as Israel has ever come to a peace agreement with the Palestinians.

All the pieces for the establishment of separate Palestinian and Israeli states, a shared Jerusalem, international administration of the Holy Basin, and dispensation for Palestinian and Jewish refugees, are in place, Olmert argues. 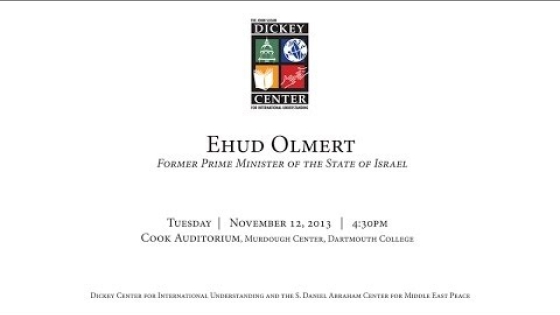