Twenty-three Dartmouth students were inducted into the Phi Beta Kappa Society at the Alpha Chapter of New Hampshire’s 226th annual meeting this week. 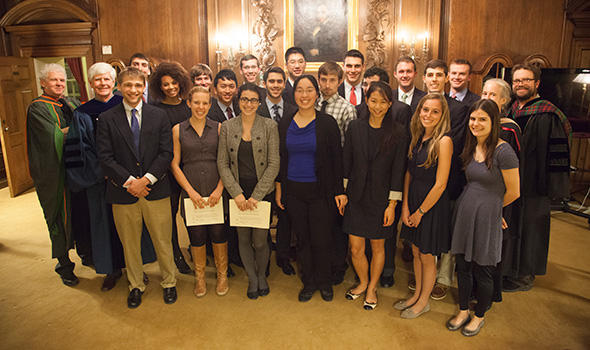 Jay Hull, president of the Dartmouth chapter and chair and professor of psychological and brain sciences, presided over the ceremony in the ornate Wren Room in Sanborn Library.

“Dartmouth prides itself on a liberal arts education,” said Hull, noting the interdisciplinary requirements of the curriculum. “Today we’re honoring students who have excelled across a broad variety of disciplines.”

To be eligible for Dartmouth’s chapter, an undergraduate student must have completed eight terms within three years of matriculation and be ranked among the top 20 students for cumulative grade point average.

Vice president of the chapter Colin Calloway, the John Kimball Jr. 1943 Professor of History and Professor of Native American Studies, and Kate Soule, secretary-treasurer of the Dartmouth chapter and president of the national Phi Beta Kappa society, also gave brief remarks congratulating the new members. Soule is the director of Dartmouth’s Arts and Sciences Finances and Research Administration.

The inductees, dressed formally for the occasion, were called individually to sign the chapter constitution and receive a certificate recognizing their honor. 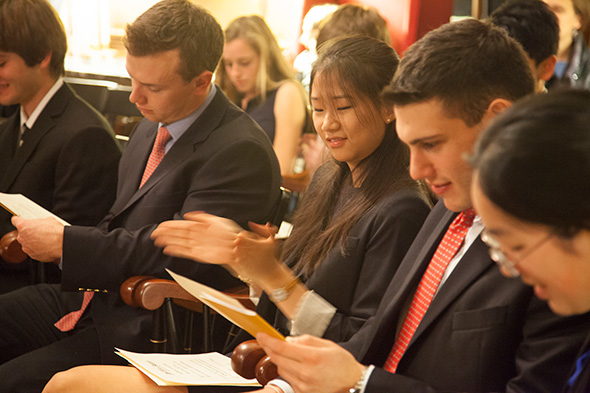 In addition, eight members of the Class of 2015 were recognized for the Phi Beta Kappa Sophomore Prize, awarded for the highest grade point average at the conclusion of five terms. Elizabeth Smith, professor and chair of biological sciences at Dartmouth, was inducted as an honorary member at the meeting.

Phi Beta Kappa is the oldest academic honors society in the United States. It was founded in 1776 at the College of William & Mary. Founded in 1787, Dartmouth’s chapter is the fourth oldest in the nation. Today, the society has more than 500,000 members, and chapters at 276 colleges and universities.