Professor of Music Sally Pinkas talks with the Valley News about next week’s concert “Playing for Peace,” which will include the world premiere of Kareem Rouston’s Traces, described by the Emmy-nominated Syrian composer as a “meditation on loss.” 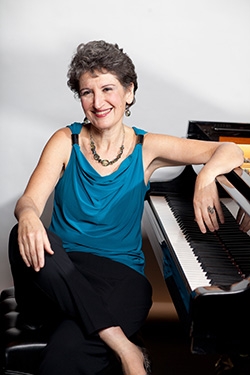 The new piece was co-commissioned by the Hopkins Center for the Arts.

The Israeli-born Pinkas, who is Dartmouth’s pianist-in-residence, will perform “Playing for Peace” November 13 at the Hopkins Center along with Syrian clarinetist Kinan Azmeh and New Hampshire’s Apple Hill String Quartet, writes the Valley News.

“Playing for Peace,” writes the Valley News, is meant to connect musicians from countries in conflict. But performing together “doesn’t have any different meaning than anyone else I would be playing with,” Pinkas tells the newspaper. “And that’s the beauty of it.”

The concert is part of a three-day Dartmouth residency by the composer, musicians, and Apple Hill Director Leonard Matczynski that connects them to Dartmouth students and the wider community. Other events include a public discussion on Tuesday, November 12, noon to 1 p.m. as part of the Tucker Foundation’s “What Matters to Me and Why” series; a private master class with young musicians from the Upper Valley Music Center; visits to Dartmouth music and Arabic language classes; and informal gatherings and mini-performances.