The video Echoes of Dartmouth: ’13s Revisited opens with a bit of time travel: As members of the Class of 2013 introduce themselves, the scene shifts between 2009 and 2013, and first-year students become spring-term seniors. 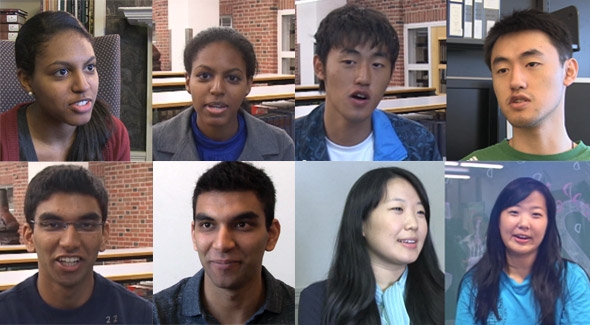 Among those who share their experiences in the “Echoes of Dartmouth” video are, in first-year and senior-year images, clockwise from top left, Millen Abselab ’13, Yuao Wu ’13, Jane Cai ’13, and Tarun Galagali ’13.

The video, produced and edited by Helmut Baer of the library’s Jones Media Center, compiles the thoughts of eight students about their time at Dartmouth. Combining senior-year interviews with footage filmed at the library open house four years previously, the video explores the students’ lasting impressions of Dartmouth, their most memorable college experience, their advice for the newest incoming students, and more. Above all, Echoes of Dartmouth conveys just how transformative the Dartmouth experience can be.

That’s clear at the end of the video, when Echoes of Dartmouth turns picture-in-picture, allowing the viewer to catch a glimpse of the seniors encountering their younger selves. It shows the even more articulate, thoughtful, accomplished individuals they’ve become at Dartmouth.

The library open house is a fixture of each entering class’s welcome to Dartmouth. It’s designed to bring new students into the life of the library from the first days of their academic careers. The open house provides a Seuss-themed introduction to what’s available through Dartmouth’s library system, from information resources to study spaces to special collections. 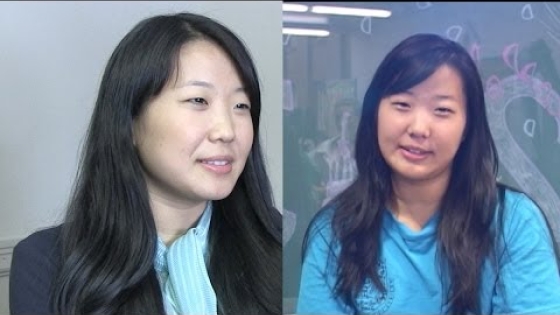 Andrea Bartelstein, education and outreach librarian, says the video series helps tell an important Dartmouth story. “Every year since 2008, we’ve videotaped students at the library’s first-year open house, during orientation week. The staff at Jones Media Center puts together the videos and puts them on YouTube.”

These video projects constitute an important part of the portfolio for one of the library’s three one-year postgraduate internships. Working alongside Baer, the Jones Memorial Digital Media Intern provides support, management, training, and promotion for the digital media software and hardware in the Jones Media Center, assisting faculty, students, staff, and alumni with all phases of multimedia projects, including research, production, post-production, and publication. Jones intern Matthew Castellana ’12 co-produced Echoes of Dartmouth for 2013.

The plan, say both Baer and Bartelstein, is to continue the Echoes of Dartmouth series. The project “has been constantly evolving; for example, we now record the freshmen addressing their future selves on camera,” Baer says. And the production team is intrigued by the possibility of inviting the participants back as alumni at some point in the future. Stay tuned.