Who’s That Atop Baker Tower?

Wearing a climbing harness and secured with two ropes, Bob Fulmer looks to the sky.

“We’re rigged for an ascent of the north face. If it starts raining, though, we won’t go,” he says. The way Fulmer talks, it sounds like he’s about to summit a serious mountain. 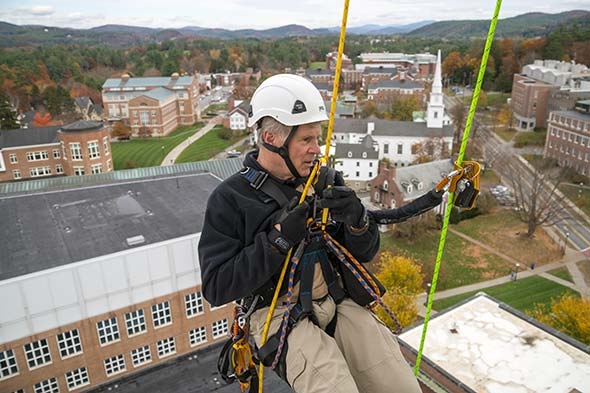 As he examines Baker Tower, Robert Fulmer says he “can’t help but enjoy” the view. (Photo by Eli Burakian ’00)

But for Fulmer, and for Dartmouth students, it’s a much more familiar peak. Those who strolled across the Green this week may have looked up and seen a surprising sight: a man dangling from the spire of Baker Tower. It wasn’t a daredevil act, though; it was Fulmer.

Completed in 1928, Baker Tower, with its iconic clock, is Dartmouth’s tallest and most recognizable building. But like any building, the tower, which is based on the architecture of Philadelphia’s Independence Hall, can use a facelift every now and then.

“We’ve noticed the building showing signs of age, and we thought it’d be good to do a comprehensive assessment so we can determine what repairs are appropriate,” says Frank Roberts, associate vice president of Facilities Operations and Management at Dartmouth.

And when it comes to renovations, the structure poses some unusual challenges.

So Fulmer, a building consultant for the Maine-based Fulmer Associates, spent three days last month, and a few more this week, meticulously examining the tower. He’s performing what he calls an initial “forensic investigation” to see where the tower needs work. He was looking to make sure the building is up to code, examining potential engineering issues, and determining whether certain materials—such as the distinctive copper roofing—have reached the end of their service life. 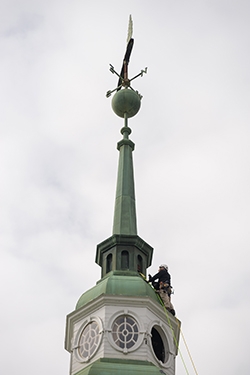 It would have cost the College about $75,0000 to rent a crane large enough to hoist Robert Fulmer. “Rope access is just a more cost-effective process,” he says (Photo by Eli Burakian ’00)

Because of the tower’s height, it would have cost about $75,000, Fulmer says, to rent a crane tall enough to hoist him to do his examinations. “When you think about it, rope access is just a more cost-effective process,” he says. It would also be an eyesore, he says, to have an enormous crane parked in front of the library for days.

So Fulmer spent the three days strapped into his climbing harness, crawling slowly over the four sides of the tower.

“It’s a fantastic opportunity,” says Fulmer, standing on a roof below the tower prior to starting his ascent. Talking over the ringing of the tower bells, which signal that it’s 11 a.m., he says, “It’s such a beautiful, iconic building.”

And how does he get to the top of the tower? While there are occasional tours that take visitors to a balcony about three-fourths of the way up the tower, it is rare to be allowed access to the top. But there is a way.

After taking the stairs to get to the balcony level, Fulmer scrambles up several wooden ladders. On one floor, he ducks below and squeezes around the massive Baker bells, some of which weigh up to 5,300 pounds. He carefully times when he will be on the bell floor, so that he is not navigating through them when they start to ring. Another rickety ladder takes him to the top, where he reaches a small room with 360-degree views of campus. The walls of the room are littered with the names and graduating years of alumni. The tower sways slightly with each gust of wind.

Fulmer, who is now about 270 feet above the Green, climbs out an oval window to begin his examinations.

On the tower face, with his ropes anchored to the top of the spire, Fulmer works methodically. He glides slowly over the surface of the tower, carefully eyeing every detail. He runs his fingers over splintering wood and takes photographs of architectural features. His recommendations will help inform the workers who will eventually undertake the renovations.

As he works, Fulmer’s silhouette gives a rare perspective on the sheer size of the tower. The clock looks to be almost twice as tall as Fulmer. The weathervane, which is barely visible across campus, is nearly nine feet long and weighs 600 pounds.

As he dangles from the spire, Fulmer is asked if he has time to enjoy the view while he is working. Behind him are miles of rolling mountains and a picturesque view of the Connecticut River Valley.

“I can’t help but enjoy it,” he says with a smile.

Date
12/17/2019
Body
Over winter break, Dartmouth will remove two declining sugar maples on the southeast corner of the Green across from the Hopkins Center for...
Image
Thumbnail 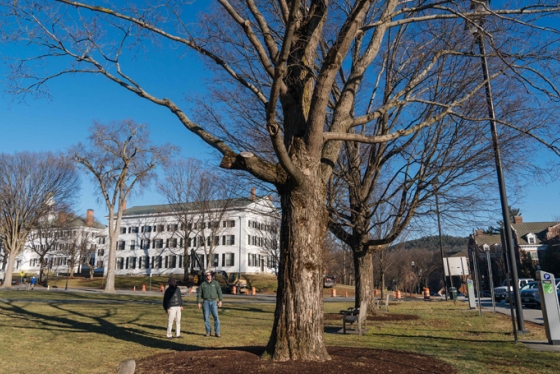