Branko Cerny ’13 had it all. He had a diploma from Dartmouth, a job at Google, and a new start in San Francisco. But he also had an idea, one that he couldn’t sit on any longer. 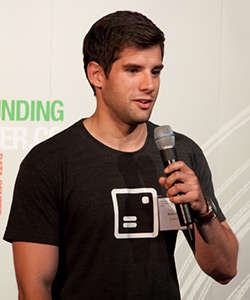 So after just three months of working at Google, he quit his job to pursue his passion. Soon thereafter, he launched the startup SquareOne Mail.

Did people think he was crazy? “Yeah,” Cerny says with a laugh. “I’ve gotten that a lot.”

But he’s not looking back. And why would he? Already, SquareOne has attracted a substantial amount of venture capital. This summer, the company opened its doors in a new office space in downtown San Francisco. And with a beta version just released last month, the future looks bright for SquareOne.

SquareOne hatched out of Cerny’s personal needs. While at Dartmouth, he was involved in many student activities, including serving as the publisher of The Dartmouth. He was also the founder and president of TEDx at Dartmouth, a series of lectures from Dartmouth students and professors about technology, entertainment, and design. With so many commitments, Cerny’s phone would chirp constantly with new email messages. The vast majority were unimportant.

“But I had to look at every single email message, because there was a slight possibility that this email was a time-sensitive one, that perhaps there was an issue at the printing press,” Cerny says, referring to his work for the student newspaper. “I realized this was incredibly detrimental to me doing well academically.” 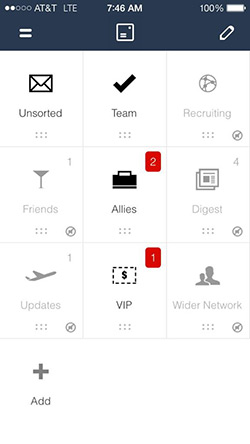 A screenshot of the SquareOne illustrates how the app prioritizes email. (Courtesy of Branko Cerny ’13)

Cerny wanted an email system that could understand what mattered to him, and when it mattered. He created SquareOne to act as a sort of personal assistant, letting users control which messages reach them at any given time. For example, when a user hits the town on a Friday night, he or she may want to hear only from friends, and can turn off notifications from work colleagues’ emails. But on a Monday morning, not wanting to be disrupted by friends or family while in an important meeting, users may choose to be notified only when they get a work-related email.

But it wasn’t just a busy schedule at Dartmouth that helped him create SquareOne. Cerny had the support of two classmates and co-founders—software developer James Mock ’15, and designer Sang Lee ’13. The company recently hired a fourth employee, software engineer Arthur Conner ’91. Cerny says his co-workers are immensely talented and dedicated.

“What is often overlooked is that a startup CEO is only as good as the team that he leads toward making a vision a reality,” says Cerny. “It has been my co-founders who filled me with the courage and confidence that we can turn this into a reality.”

In addition, Cerny says he was inspired by his Dartmouth professors, who constantly encouraged students to pursue their ideas.

“Dartmouth fosters individuality, and this belief that everyone can be a world-changer if they work hard enough,” says Cerny, a native of Prague, Czech Republic. “That really creates a sense of empowerment, and it’s an underlying mentality that I think a lot of Dartmouth students acquire.”

“Dartmouth gave me a lot of tangible tools to approach problems,” he says. “We weren’t just learning abstract theories.”

He has already called on many of those different approaches while leading SquareOne. And while Cerny admits being the CEO of a budding business is stressful, he doesn’t show it.

“Running a startup is an exercise in being constantly worried, and constantly pretending that you’re not worried,” he says, laughing. Cerny, who has brown hair and sports a five-o’clock shadow, is laid back and personable. He speaks deliberately, saying he’s just as surprised as everyone else about SquareOne’s success.

But its success is less of a surprise to one of Cerny’s mentors, Adjunct Professor of Business Administration Gregg Fairbrothers, who saw Cerny’s potential as an undergraduate.

“Branko is the poster child for learn-by-doing entrepreneurship,” says Fairbrothers, who serves as an adviser to SquareOne. “From his first conception of the SquareOne idea, he has never been afraid to charge ahead and learn as he goes.”

Though Cerny has left campus, Dartmouth continues to be instrumental in his life. SquareOne’s first investor was a Dartmouth alumnus. At the annual Dartmouth Entrepreneurs Forum, SquareOne was awarded $5,000 for winning second place for best pitch for a startup. “The Dartmouth support network has been amazing,” says Cerny.

And one of SquareOne’s first customers might be another Dartmouth alumnus—President Phil Hanlon ’77. In his inaugural address in which he announced the launch of a new student innovation center, President Hanlon mentioned Cerny, Lee, and Mock as examples of Dartmouth students’ innovative potential.

“They’ve founded a company called SquareOne Mail, which provides a mobile personal assistant for prioritizing your in-box,” said Hanlon. “All I can say is, sign me up yesterday!”