Launched by Athletic Director Harry Sheehy in July 2011 as an initiative for student-athletes, DP2 has now integrated a full range of athletic, academic, and personal-development programs into the lives of student-athletes. 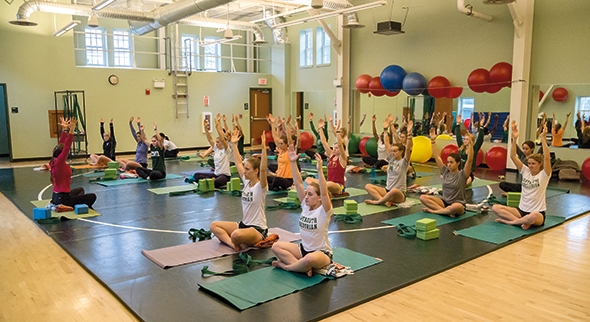 As part of the Dartmouth Peak Performance program, student-athletes participate in a range of athletic, academic, and personal-development programs. Above, members of the Nordic ski and equestrian teams take a yoga class. (Photo by Eli Burakian ’00)

Dartmouth consistently leads the NCAA in “academic progress rate” and “graduation success rate,” and the level of student-athletes achieving GPAs of 3.5 or higher is 43 percent and climbing.

“DP2 serves as an umbrella for the integration of services and resources targeted at helping our student-athletes achieve the highest levels of physical, intellectual, and personal growth during their Dartmouth careers,” Sheehy says.

The program focuses on key areas of performance—academic, athletic, and personal—through the collaborative efforts of professionals across campus. “We have people here who are passionate about helping our student-athletes reach their potential and work toward that goal every day,” he says.

The growing record of successes “provided even more evidence that we are on the right track in creating a menu of resources,” says Galbraith.

He points to recent highlights, including Abbey D’Agostino ’14 becoming the most decorated track athlete in the history of the Ivy League, and the Dartmouth Women’s Sailing Team winning a national championship.

DP2 by the Numbers

DP2 offers a broad menu that allows athletes and coaches to tailor conditioning, nutrition, and training to specific teams and positions, to sharpen professional and academic skills with faculty advisers, and to develop leadership skills in both team and community settings.

In DP2, athletes learn to make healthy lifestyle choices, whether practicing yoga and learning about nutrition, or understanding the harmful effects of alcohol on athletic performance and personal growth.

DP2 athletes are encouraged to give back to the community through work with service organizations and by embracing leadership opportunities throughout their lives, Galbraith says.

“A student-athlete’s experience at Dartmouth should continue to be one of the most memorable periods of a young adult’s life,” Galbraith says. Only a small minority of Dartmouth athletes will go on to a career in professional sports, he says. “So really, what we are doing is educating future generations of leaders.”

Sailor Carissa Crawford ’14 says when DP2 began in her sophomore year, she saw dramatic changes for student-athletes. “For me personally, the massage therapists and yoga classes have helped tackle both physical and mental stress that builds up in a season,” she says.

“Our team has also done a number of exercises with the leadership coach, Steven Spaulding, which have helped us redirect our goals as a team. We have also received great advice from the nutritionist to help emphasize the importance of properly fueling our bodies.”

Head Football Coach Buddy Teevens ’79 says DP2 is “a differentiator for us. It is about being great—as athletes, as members of the Dartmouth community. It is a tremendous resource for our coaches and student-athletes.”

The student-athletes who come to the College are not only looking for team success but also aim to reach the highest levels in their academic and professional lives, Galbraith says. DP2 is building on this tradition and developing a framework for excellence, he says.

Abbey D’Agostino agrees. “Through DP2 we have all kinds of advantages,” she says. “I honestly feel like I have everything I need here to reach my potential.”