Former New Hampshire Supreme Court Chief Justice John Broderick will explore the powers and limits of the state judiciary with the Dartmouth community as he begins a year as the Perkins Bass Distinguished Visitor at the Nelson A. Rockefeller Center for Public Policy and the Social Sciences. 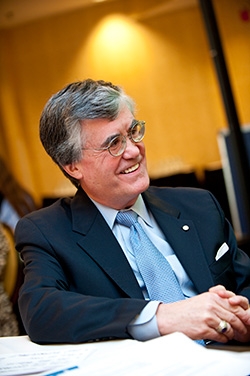 “I look forward to discussing and explaining the critical role of our state courts in this new and transformative era,” says Broderick, who left the high court after 15 years to take over, in 2011, as dean of the University of New Hampshire School of Law.

Broderick is the second Distinguished Visitor named by the Nelson A. Rockefeller Center. Former Gov. John Lynch, New Hampshire’s longest-serving governor, was the inaugural visitor under the program.

Lynch says he has been impressed by the students he worked with during his time at Dartmouth.

“The students were absolutely committed to making a difference in the form of public service,” Lynch says. “I am hopeful that from that group will emerge some real leaders who will be able to make a big difference in this country and in the world.”

Broderick’s wealth of experience in both public policy and the law will be a great asset to the Dartmouth community through the Perkins Bass visitorship, Lynch says.

“I spoke to John Broderick this morning to congratulate him,” Lynch says. “I think he’ll do a great job. He has a lot to offer the students.”

Lynch will continue teaching at Dartmouth next year as a senior fellow in the Center for Global Business and Government at the Tuck School of Business.

“I am genuinely honored to be selected as the second Perkins Bass Fellow at the Rockefeller Center. Congressman Bass had a distinguished career in public service both in the state legislature and the United States House of Representatives,” Broderick says. “Indeed the Bass family, past and present, has personified thoughtful, principled commitment to consequential public service over many decades.”

Broderick will give a public lecture, visit classes, and meet with faculty and students throughout the year.

“We are honored to have the opportunity to bring Judge Broderick to campus,” says Andrew Samwick, director of the Rockefeller Center. “He has broad experience and deep knowledge of the way the law shapes public policy and will be a wonderful resource for students, faculty, and the community.”

“The Rockefeller Center itself is doing important work in teaching and inspiring Dartmouth students to meaningfully engage in the public square and to fully participate and lead public policy debate and discussion on issues important to the American people,” Broderick says.

Broderick was a trial lawyer of 22 years when he was appointed to the Supreme Court in 1995 by Gov. Steve Merrill. He served on the high court for 15 years, the last six years as chief justice. He left the court in November 2010.

Since the Rockefeller Center’s founding in 1983, its mission has been to educate, train, and inspire the next generation of public policy leaders in all fields through multidisciplinary education, public lectures by visiting scholars and dignitaries, skills training, and public policy-oriented research across the social sciences. The center’s ongoing work honors the contributions of Dartmouth alumnus Nelson A. Rockefeller ’30 to the life of the nation.