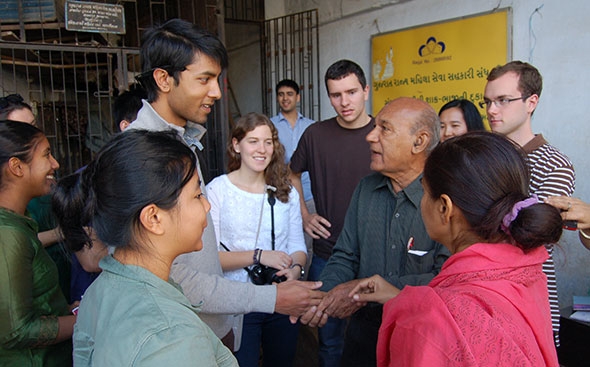 Joseph Singh ’14 shakes hands with a local guide, who tells him how silent bids are made in the vegetable market in Ahmedabad, India. (Photo by Charles Wheelan ’88)

The students in the Global Policy Leadership Practicum, taught by Charles Wheelan ’88, experienced both.

The program, run by The Nelson A. Rockefeller Center for Public Policy and the Social Sciences, combined a full semester of study with a two-week long trip during the interim period after classes finished at Thanksgiving. Students met with Indian government officials and policy leaders during the trip, and worked together to draft a task force report on Indian economic reform.

Writing from India with two other students, Amy Couture ’14 called the experience “an absolute whirlwind.”

“We’ve gone from the chaos of Mumbai to the peace of a distant village and from one of Asia’s largest slums to fancy business high-rises. Throughout, we’ve had discussions and dinners with politicians, academics, CEOs, schoolteachers, doctors, and entrepreneurs.”

“Talking to villagers about the problems they see in their areas, hearing working economists’ observations about potential reforms, and seeing the work that various organizations are doing to address the very problems that we are working to understand has been an incredible experience.”

Wheelan, a senior lecturer and policy fellow at the Rockefeller Center, connected his students with expert sources developed through his prior work in India as a journalist and academic. He built the class around a public policy proposal his class will produce as a team at the end of the trip.

The idea is that students will work together to synthesize their studies, interviews, and real-world experiences into a report that is “substantive, politically nuanced, and historically and culturally sensitive,” and that offers specific and actionable recommendations, Wheelan says.

The students’ challenge is to master the substance of the topic, and to come up with a process that enables the group to work together effectively, he says.

“Like much of life, this is a group exercise,” Wheelan says.

Joseph Singh ’14, who won a Rhodes Scholarship to Oxford, says the trip has convinced him of the value of experiential learning.

“The opportunity to meet with experts on the ground has enabled us to temper our policy recommendations within the broader political environment within which the Indian government operates. In turn, we’ve learned valuable lessons about crafting workable, pragmatic policies within tough political environments,” Singh says.

Couture says she has come to understand that public policy cannot be created in a vacuum. “This course has been an exercise in asking the right questions, compiling large swathes of information, and prioritizing recommendations,” she says. “And while we’re learning so much about India, Professor Wheelan also likes to say that we’re ‘learning how to learn.’ ”