“Police repression is an experience that binds people throughout the Arab world,” writes Jonathan Smolin in his new book, Moroccan Noir: Police, Crime, and Politics in Popular Culture. But as Smolin found while researching the book, Morocco has reformed the image of its national police by embracing mass media such as television cop shows and police fiction. And this, he says, is one of the key reasons the Arab Spring protests didn’t hit harder in the nation of more than 32 million. 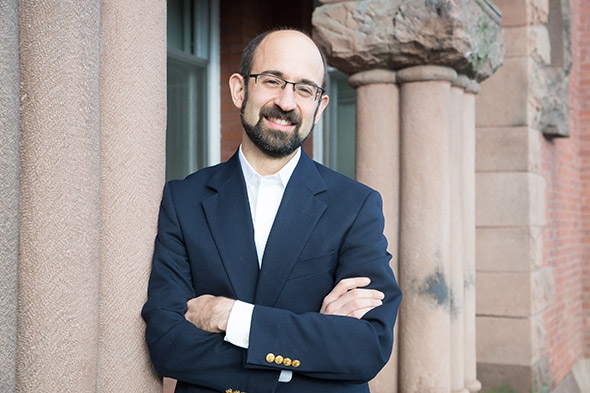 Jonathan Smolin, an associate professor of Arabic, has a new book out, “Moroccan Noir: Police, Crime, and Politics in Popular Culture.” (Photo by Eli Burakian ’00)

“What you see in Morocco that you don’t see in other Arab countries is a direct attempt to improve the public’s opinion of the police,” says Smolin, an associate professor of Arabic in Dartmouth’s Department of Asian and Middle Eastern Languages and Literatures (AMELL). Over a 20-year period, the country saw efforts “to transition out of an old, heavy-handed form of authoritarianism to a new kind of authoritarianism in which public opinion matters,” he says.

Notorious for police repression from 1960 through the 1990s, Morocco began to change in the early 1990s under King Hassan II, and since 1999, under the regime of his son King Mohammed VI. The government fostered a commercial media industry that portrayed the police in a friendlier light. As Smolin explains, the state-owned TV stations achieved this in part by bringing actors and crews to real police stations to film cop shows and movies.

“This was important, because before these TV shows and movies were made, the police station was a closed world,” he says. “It was a world that, if you went into it, you might not return. So bringing the best-known actors in the country and dressing them up like detectives and putting them behind the desks of the real-world detectives or in the real police commissioner’s office was an attempt to open the doors of the police station and bring the public into this previously taboo world.”

The Middle East is largely devoid of police fiction. Morocco is the lone exception, but the first police novel was not published there until 1997. This makes sense for two reasons, says Smolin. “Arabic literature is not for diversion, it’s not for entertainment’s sake. The other issue is that cops have been hated and detested throughout the Arab world. These are the people who drag you out of your house in the middle of the night and make your children disappear. So who in their right mind would create a novel featuring a cop protagonist?”

Having lived in Morocco from 2001 to 2002, Smolin has been back every year since for at least a month, and he was there on a Fulbright scholarship from 2008 to 2009. He spent 10 years working on his book, and received manuscript assistance from the John Sloan Dickey Center for International Understanding’s Manuscript Review Program. Much of the research material, such as recent Arab tabloids, had never been used by academics.

Adrian Randolph, associate dean of the faculty of the arts and humanities and the Leon E. Williams Professor of Art History, calls Smolin “an invaluable voice in the study of the contemporary Middle East.”

Smolin, who has taught at Dartmouth since 2005, co-founded the AMELL Foreign Study Program in Tangier, Morocco. During fall term, he taught advanced seminars in Arabic and the new Arabic novel.

“The students here are fantastic,” he says, “It’s one of the best things about teaching here. They’re critically engaged and hard working.”

Smolin studied the ancient Middle East as a University of Chicago undergraduate, and earned a master’s in Semitic languages and a PhD in modern Arabic literature from Harvard. Prior to coming to Dartmouth, the Philadelphia native had lived only in cities. He embraced the outdoors after moving to the Upper Valley, and began trail running and hiking Moose Mountain near his home in Hanover, N.H., where he lives with his wife, Jessica, who teaches in Dartmouth’s Latin American, Latino and Caribbean Studies Program. They have a 2-year-old son, Noah.

Smolin runs 70 to 80 miles a week, and at September’s Clarence DeMar Marathon in Keene, N.H., qualified for the 2015 Boston Marathon. In July, he finished fourth in the Vermont 100K, a 100-kilometer race, and last month ran the nation’s oldest and largest ultra-marathon, the JFK 50 in Maryland.

“I love it,” Smolin says of running. “Having some kind of balance is very important. Our students have extra-curriculars, and I think it’s good to carry that into adulthood.”