Part Two: In the Classroom and Beyond

This is the second in a three-part series about professors and their work. Here’s a look atpart one and part three. 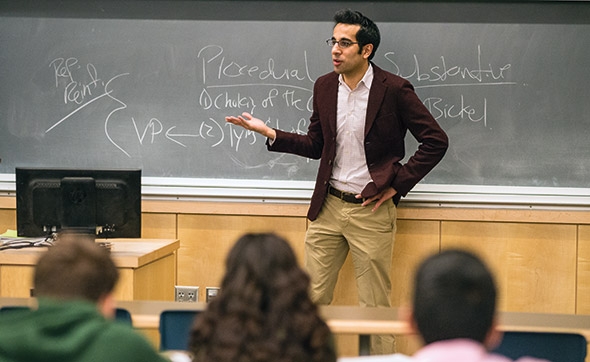 My current project is on the scope of justice. Scholars often debate the principles of justice, e.g., is redistribution fair? Is race-based affirmative action just? Are paternalistic laws justifiable? In all these cases, we assume that the only kind of action worthy of interrogation is action by state or state actors. The question of scope is rarely discussed.

The project seeks to consider ways in which non-state actors, including private employers, associations, religious groups, and even individuals may violate principles of justice.

I recently published a book titled Beyond Race, Sex, and Sexual Orientation: Legal Equality without Identity (Cambridge University Press, 2013). Speaking directly to the teacher-scholar ethos, my spring 2012 seminar, titled “Race, Law, and Identity,” asked students to read chapters from the book. This both allowed students to see how my scholarly work informs the current state of the field and gave me crucial feedback as I finished the book.

My adviser and mentor in grad school, Bruce Ackerman, the Sterling Professor of Law and Political Science at Yale, constantly pushed me to argue for big ideas, and not to be afraid to challenge conventional wisdom.

My route to academia was not a straightforward one. As far back as I remember, I always wanted to be a lawyer—a trial lawyer, in fact. After graduating from law school and working in a law firm, I realized that being a lawyer just wasn’t for me. I knew I had an academic interest in the law, but wanted to supplement that with further study in political theory. 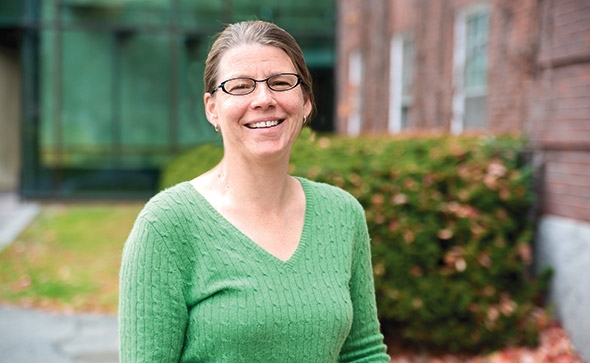 “I try to mention aspects of my research in my classes whenever I can,” says Associate Professor of Physics and Astronomy Robyn Millan. (Photo by Eli Burakian ’00)

My research project is a balloon experiment to study the high-energy electrons that are found in the near-Earth space environment. The experiment is called “BARREL,” which stands for Balloon Array for Relativistic Radiation belt Electron Losses. We are studying the Earth’s Van Allen radiation belts, a doughnut-shaped region of space around Earth that is filled with these very high-energy particles. Our balloons can detect the particles that get kicked into Earth’s atmosphere. We work very closely with the Van Allen Probes mission, two satellites launched by NASA a little over a year ago.

I try to mention aspects of my research in my classes whenever I can. I try to pick an example related to it—for example, applying the ideal gas law to a balloon that is launched and expands as it goes up to higher altitude and lower pressure. Just recently, in fact, I was discussing matter-anti-matter annihilation and brought up our balloon experiment. When an electron meets its anti-particle, a positron, the two annihilate and produce two gamma rays. It turns out that this process occurs in our atmosphere when cosmic rays enter the atmosphere. Our balloon instrument measures gamma rays, so we can see the gamma rays produced by this process in the atmosphere.

Most of my concerns right now are logistical. We are in the middle of shipping our cargo down to Antarctica for our upcoming balloon campaign this winter. There are a lot of details that need to be tracked. You can’t go buy something when you’re down in Antarctica, so we have to make sure to pack every possible thing we might need. Thankfully, I have a great team of graduate students and postdocs and colleagues at other institutions, so I haven’t been losing too much sleep lately. After our campaign is finished in February, I’ll be able to focus on analyzing all the great data we get. 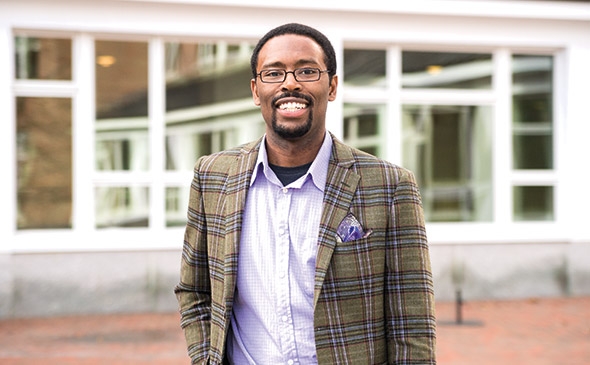 “As a scholar and researcher, I think success is answering questions that I find to be inherently beautiful and then communicating that beauty to someone else,” says Associate Professor of Mathematics Craig Sutton. (Photo by Eli Burakian ’00)

My area of research is inverse spectral geometry, which is a branch of mathematics that studies the relationship between the eigenvalues of a manifold’s Laplace operator and its underlying geometry. Metaphorically speaking, you could say that I’m interested in the extent to which it’s possible to hear the shape of a drum. That is, is it possible to completely reconstruct a drum based solely on how it sounds? In this metaphor, sound is playing the role of eigenvalues and the drums are standing in for manifolds.

Colleges and universities are charged with advancing the boundaries of human understanding and our sense of the possible while helping students discover and fully engage with their intellectual passions. The Dartmouth scholar-teacher ethos is one that recognizes the symbiotic relationship that exists between these two goals and seeks to foster it. We are building an environment in which the student, faculty, and staff discourse challenges all parties to rethink and rediscover.

My participation in a Research Experiences for Undergraduates program at the now-defunct Geometry Center in Minneapolis, Minn., was very influential in helping me become a mathematician. I was exposed to a lot of math I hadn’t seen or imagined before, so the experience was eye opening. In the end, I think this experience is where the idea that a career as a mathematician could be fun and intellectually rewarding first took hold.

As a scholar and researcher, I think success is answering questions that I find to be inherently beautiful and then communicating that beauty to someone else. And, if I’m really lucky, maybe one of my answers will eventually help provide a better understanding of the natural world we inhabit.