Rhodes Scholars Reflect on Their Awards and Dartmouth

Last month, Jonathan Pedde ’14 and Joseph Singh ’14 were named Dartmouth’s 74th and 75th Rhodes Scholars. Established in 1903 through the will of British philanthropist Cecil Rhodes, the scholarship pays all expenses for a graduate program at the University of Oxford in England. A class of 83 scholars is selected each year from across the globe.

Pedde and Singh, who are both from Canada, talked with Dartmouth Now about their Dartmouth experience, attending Oxford University, and their goals for the future.

As a junior in high school, Jonathan Pedde ’14 was getting ready to tour several elite colleges and universities. Before leaving, he sent emails to dozens of economics professors whom he admired at these institutions, hoping to talk with them when he visited campus.

Only one, Dartmouth’s Douglas Irwin, the John Sloan Dickey Third Century Professor in the Social Sciences, offered to meet with Pedde.

“It was a Saturday afternoon and Professor Irwin came in to campus and took a half hour to sit down with me,” Pedde says. “I was absolutely blown away by that. I hadn’t even applied to Dartmouth yet, much less been admitted.”

Pedde was admitted, and his meeting with Irwin sealed the deal. “That conversation sold me,” he says. It was a decision that has paid off: This month he was named one of Dartmouth’s Rhodes Scholars.

The native of Regina, Saskatchewan, traveled to Winnipeg for his final Rhodes interview, which took place on November 30 before a committee of seven. Pedde flew back to Regina that day, and his parents picked him up at the airport. On the drive home, he got a phone call. He was one of Canada’s 11 Rhodes Scholars for 2013, and the lone representative from Saskatchewan.

“We were all pretty excited,” says Pedde, a soft-spoken economics major. “I was very surprised and very grateful.”

At Dartmouth, Pedde has written for The Dartmouth, played on the Ultimate Frisbee team, and served as a research assistant to Professor of Economics Meir Kohn.

“I’ve had a great time at Dartmouth,” he says. “I’ve had a wonderful group of faculty members and peers.”

Associate Professor of Economics Eric Zitzewitz, who taught Pedde in a finance course, says it was easy to see Pedde’s intellect and humility on display in the classroom.

“He had something insightful to say on every paper we read,” says Zitzewitz, “and he contributed in a way that did not dominate the conversation or shut out his classmates.”

“I’m very fortunate that there were many, many people at Dartmouth who helped me along the way,” he says.

Having studied for a term at Keble College at Oxford, through an exchange offered by the Nelson A. Rockefeller Center for Public Policy and the Social Sciences, Pedde looks forward to returning to the distinguished institution, which dates back to 1096. This time, he’ll spend two years on campus as he pursues a degree in economics.

Pedde is glad there will be a familiar face on campus—Joseph Singh ’14. 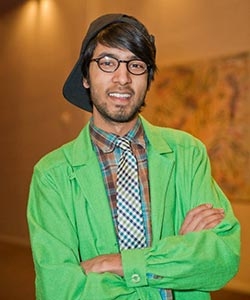 The phone connection breaks up as Joseph Singh ’14 talks during a telephone interview. Just two days after winning a Rhodes, Singh is in Mumbai, India, with Dartmouth classmates for a two-week trip that is part of a public policy course, supported by the Rockefeller Center.

“This is why this trip is special,” says Singh, his voice crackling as he notes the lack of Internet connection and phone reception in the country. “We’re starting to get a real sense of the economic issues here.”

“They put me on speaker phone and told me the news. I got pretty emotional and started babbling incoherently and thanking them,” Singh says with a laugh.

Just a few days earlier, though, Singh had been worried about his interview with the committee.

“My fear was that I was going to clam up and not be able to share my story and share my goals,” he says. The entire application process, which Singh began last May, came down to a 40-minute conversation with the panel.

The night before his 8 a.m. interview, the Rhodes Trust hosted a cocktail reception for finalists to meet each other and the panel members who will evaluate them. Singh, sipping a glass of cabernet, found his fellow finalists and the committee members to be friendly and approachable. The evening put him at ease, and he left his interview the next day feeling good about what he had said to the committee.

Eager to get his mind off things as he waited for the phone call, the Toronto native went home and spent the afternoon helping his family pick out and set up a Christmas tree. He told himself that he’d be satisfied with whatever the outcome was because he felt he had done his best. As it turned out, his best was good enough.

Associate Professor of Government Benjamin Valentino says the award is a tribute to Singh’s work ethic and intellectual curiosity. “Joe represents the very best of Dartmouth,” he says. “Best of all, he wants to use his talents to make a difference in the world.”

On campus, Singh is a member of the Dartmouth Aires a cappella group, works as head writing tutor for Dartmouth’s Student Center for Research, Writing, and Information Technology, and is a James O. Freedman Presidential Scholar. He’s written for CNN, Time, and Foreign Policy. Through the Rockefeller Center’s Policy Research Shop, he has also testified before the New Hampshire House of Representatives on voter identification reform and has interned for the Center for a New American Security. The government major hopes to pursue a career with Canada’s foreign service.

Like Pedde, Singh says the Dartmouth Scholarship Advising Office was vital to his winning the Rhodes. It was one of the many things throughout his Dartmouth experience that was instrumental in getting Singh to this point. Singh says there are about 10 Canadians in the Class of 2014. It’s a testament to the value of a Dartmouth education that two of them received this honor, he says.