If you can’t find the Gambia on a map, you’re in good company. Even Daniel Bornstein ’14, who has spent months doing research in the African country, has trouble locating it.

“Even if you know where to look, you still almost can’t see it,” he says with a laugh. 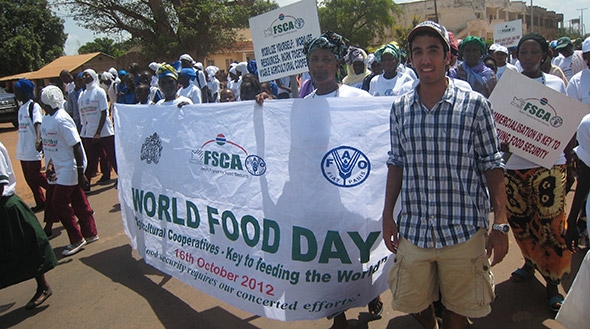 But what Bornstein does see clearly is a tiny country that is a major example of the changing nature of agriculture throughout the world. A geography major, Bornstein is writing a senior thesis on the relationship between the West African country and the European countries that consume Gambian exports.

Bornstein’s research focuses on a recent measure passed by the European Union (EU) that has created strict regulations on the amount of aflatoxin, a naturally occurring fungus, allowed in peanuts exported to the continent. Aflatoxin has been shown to contribute to liver disease. While the measure is well intentioned, Bornstein says, it has had a tremendously negative impact on the Gambia, whose chief export is peanuts.

Bornstein, who serves as co-director of the John Sloan Dickey Center for International Understanding’s student organization Dartmouth Coalition for Global Health, spent a term studying abroad in the Gambia before returning last summer to the African country to conduct research on the effect of this regulation on Gambian agriculture and economy. He was fascinated by the relationship between small-scale African farmers and global consumers.

“My goal in going back to the Gambia was to see how farmers and the government are responding to this strict new standard,” says the Long Island native.

Through numerous interviews with government officials and farmers, Bornstein found that while the EU has pledged support to help countries adapt to the new regulations, these efforts have had little effect. The EU’s efforts are not comprehensive, he says, but instead focus narrowly on making sure exporters can measure the aflatoxin levels. The EU isn’t giving farmers the skills and equipment to reduce aflatoxin in the peanuts they are harvesting, or building the capacity of Gambia’s domestic regulatory body to monitor the levels, he says. 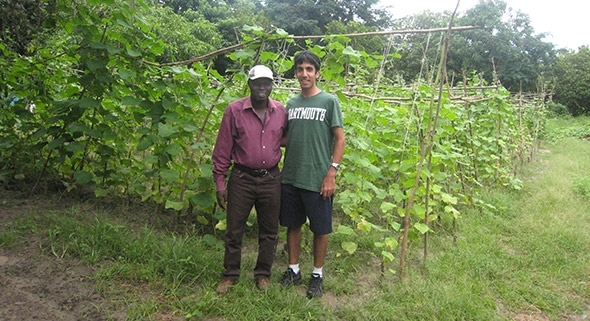 “There is no focus on how to invest in the farmers,” says Bornstein. As a result, “the regulations expose how dependent these African countries are on exporting one or two products. Their economies aren’t diverse enough to recover.

There is a side effect that goes beyond the farmers. Peanuts are a local staple, and many Gambians end up consuming the peanuts that don’t get exported—the ones with high levels of aflatoxin. Because Gambia hasn’t applied the same regulations to its domestic market, it could increase the aflatoxin risk for Gambians.

These issues are complicated, and there are no clear solutions, says Bornstein, who haswritten on global food issues for The Christian Science Monitor.  “But I want to show that policy around food safety regulations has real effects on these countries,” he says.

“Daniel’s research in the Gambia investigates how rich countries’ food safety standards play out in the much poorer countries that depend on their markets,” says Freidberg. “He’s showing how those standards can push countries such as the Gambia to prioritize the safety of their food exports over that of the domestic food supply, despite European technical assistance that is supposed to benefit both.

“It’s an important critique of ‘aid-for-trade’ policies that can end up reinforcing the geographic and social unevenness of food-borne risk,” she says.

Bornstein plans to pursue a career in advocacy or academia. His experience at Dartmouth has been formative, he says, and Bornstein is particularly thankful for the personal connections he has developed with professors.

“You build these relationships, and it happens outside of class in office hours and conducting independent research,” he says. “At Dartmouth it’s not just about taking courses.”