For Students on Campus During Break: Work, Play, and Games

There’s been snow in Hanover, more than a foot of it. There have been frigid temperatures: On December 17, the mercury dipped well below zero on campus.

But if you have complaints, don’t bring them to Ali Winkel ’14, a captain of the women’s ice hockey team.

“Winter interim is definitely my favorite time of year,” she says.

Though many students have gone home to celebrate the holidays with their families, there are some who, for a variety of reasons, stay at Dartmouth for the more than six weeks between fall and winter terms. And while it may be a bit quieter on the Hanover plain, these students are clearly staying busy.

For Winkel, it’s great to bond with her teammates and focus on hockey.

“Being one of the only teams on campus, we spend most of our time together, which brings us closer as a team. We do a bunch of different events and activities, including a secret Santa exchange, bowling, playing Wiffle Ball, having Christmas parties and many team dinners.

“I think this time we spend together is very beneficial, as it can improve our team dynamic, which can then transfer over to the ice. As we spend time together, our care for one another grows. On the ice, this makes us more willing to sacrifice and take risks for our teammates,” she says. 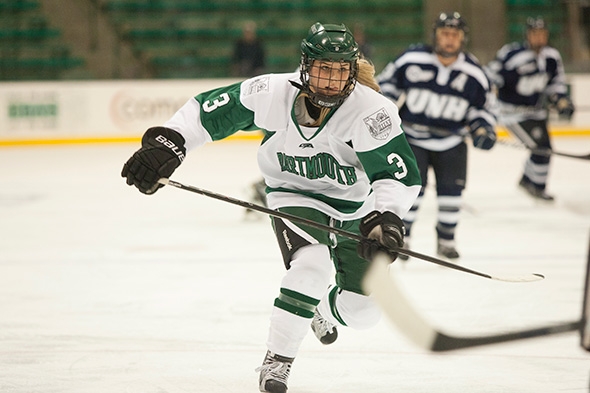 “Being one of the only teams on campus, we spend most of our time together, which brings us closer as a team,” says Ali Winkel ’14, a captain of the Big Green women’s ice hockey team. (Photo by Mark Washburn)

While some, like Winkel, have to be on campus, non-athletes have other reasons for staying in Hanover. For Pawan Dhakal ’16, the trip back to Nepal is just too far and too expensive.

“I was there over the summer, but it’s at least 25 hours of flight,” he says, and he usually has a stop in Qatar before flying to Kathmandu, Nepal’s capital. “And then it takes about a week to acclimate to the time change.”

Dhakal has filled his days in Hanover by working 25 to 30 hours a week at the Jones Media Center and making dinners with fellow students.

Anthony Lafontant ’16, a computer science major from Denver, is using the interim to work on outside interests. He’s created an app that he’s hoping to release this winter, and he’s using this time to work further on the project.

“I think it’s more valuable to stay here where there are more resources for me to take advantage of,” he says.

Are his parents happy about his decision to stay on campus?

“Probably not,” he says with a laugh. “But they understand.”