From Wales to Dartmouth Via the Sutton Trust

How far would you travel to find a college to call home?

For Jennifer Evans ’17, from Pontypridd, Wales, the answer is about 3,000 miles, with an ocean in between. 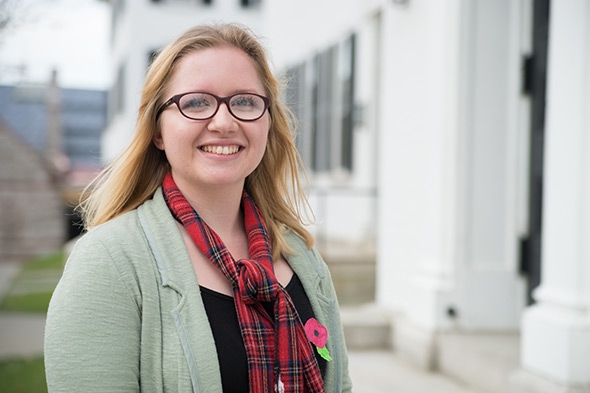 Jennifer Evans ’17 of Pontypridd, Wales, found her way to Dartmouth and an American liberal arts education through the U.K.’s Sutton Trust. (Photo by Eli Burakian ’00)

Back home in the U.K., where Evans attended Bryn Celynnog Comprehensive School and studied for A Levels in English, history, Welsh, and psychology, an undergraduate education would have meant a place at a British university, earning a degree in English literature. Most of her coursework would have involved attending lectures, says Evans, the first person in her family to pursue a BA.

Evans’ connection with the Sutton Trust set her on a different path, one that led to Dartmouth. The trust, says Maria Laskaris, Dartmouth’s dean of admissions and financial aid, is “an educational advocacy organization in the U.K. that is doing a tremendous amount of work to help increase the numbers of U.K. students from nontraditional backgrounds going to universities.”

The Sutton Trust launched its U.S. Programme in 2012, cooperating with the U.S.-U.K. Fulbright Commission. As the trust’s website explains, “The programme aims to support highly talented low- and middle-income U.K. youngsters to apply for undergraduate study in America, and to act as a beacon to inspire other talented state school students.” Dartmouth has been connected with the trust’s work in the U.S. from its beginnings, and Evans is part of its first cohort of students here.

Evans credits her advisers from the Sutton Trust for making the match with Dartmouth. She joined other U.S.-bound program participants to a college fair and preview in New Haven, Conn., in the summer of 2012, and sensed a “good fit” with Dartmouth’s active, involved culture. She also relished the “scope to study abroad that the D-plan makes possible,” she says.

Matriculated as a member of the Class of 2017, Evans took a range of fall term classes: first-year writing, Russian language, and psychology. And she has immersed herself in the life of the community at Dartmouth, joining the Dartmouth College Gospel Choir, the chamber orchestra (she plays the clarinet), the mock trial society, and the Christian Union.

If that sounds perfectly normal for a Dartmouth student, that’s exactly the point. Evans explains that among her friends studying in the U.K., such a level of extracurricular engagement would make her a bit unusual. That was the case during her secondary schooling, she says, but her parents supported her in “keeping up activities” even as academic intensity increased and high-stakes testing—the A levels—appeared on the horizon.

George Bernard Shaw’s notion that the U.S. and the U.K. are countries “separated by a common language” has proved true from time to time. “I remember when I was packing for my Dartmouth Outing Club trip, I saw the words “warm shirt” in the packing list,” she says. “Since a ‘shirt’ in the U.K. is only used to mean a posh, button-up shirt, both me and my parents didn’t understand why I was having to wear a shirt canoeing. I ended up having to post on the Class of 2017 Facebook group asking what a ‘warm shirt’ actually was, which got me some funny replies.”

But Evans says she has been more surprised by differences in the habits and expectations of her new academic culture. That awareness is proving an asset in the classroom, saysAsia Rowe, who teaches Evans’ writing course. “Her keen and curious mind, together with her knowledge of academic conventions and culture outside the U.S., frequently enrich and expand our class discussion,” says Rowe. “I am continually impressed by both her natural intellectual ability and her willingness to grow as a thinker and writer. Jennifer has been a real pleasure to have in class.”

Being an international student, Evans says, offers her “the chance to reflect on the way we live in the U.K., and a better understanding of the world at large.” And, she observes, it comes with instant connections to fellow international students from around the world. Evans is committed to an international perspective on her college career; in addition to sophomore summer plans to join Dartmouth’s program in Russia, a Language Study Abroad (LSA+) program taught in St. Petersburg, Evans also has her eye on a study term elsewhere in the U.S.—which, of course, in her case, is actually more “study abroad.”

If there’s a downside to American college life, suggests Evans, it’s that life on campus “does cocoon you a bit compared to student life in the U.K.” On the other hand, “it keeps you focused on using this time well, on your education and experience.”

Which, in fact, suits Evans just fine, as she’s here to make the best of the wide-open opportunities Dartmouth has to offer.