In the months leading up to the 2014 Winter Olympics in Sochi, Dartmouth Alumni Magazine caught up with three Olympic veterans—Hannah Kearney ’15, Andrew Weibrecht ’09, and Gillian Apps ’06.

Read the full stories, by Bill Gifford ’88 and Jim Collins ’84, published in the January/February issue of the magazine. 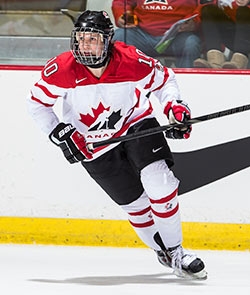 Four years ago, at the Vancouver Games, Kearney stunned everyone by defeating the Canadian favorite, Jennifer Heil, in the mogul-skiing event. Now, going into Sochi, she’s the one with the bull’s-eye on her ski suit—the reigning World Cup champion, the dominant female mogul skier of her generation, and one of the winningest U.S. skiers in history. “I’m ready,” she says. “Give me a day to train and I could compete tomorrow.”

It was Lindsey Vonn’s former husband, downhiller Thomas Vonn—along with teammate Dane Spencer—who gave Weibrecht the name “Warhorse” when he was a rookie with the U.S. Ski Team. The nickname captured the way the new skier attacked the mountain. It stuck.

Almost four years after winning the bronze in Vancouver, following World Cup seasons interrupted by two shoulder surgeries and two ankle surgeries, Warhorse has earned the other definitions of the name: He’s still a charger, but he’s also become a veteran who has endured many struggles and battles.

Once a rising teen star in Canada’s centralized Olympic training camp, Apps was now almost 30 years old—and a two-time gold medal winner. At the 2006 Games in Turin, Italy, she had been the third-highest scorer among all players. She is still a big power forward—at 6 feet tall and 175 pounds, the biggest player on the squad—and still plays the game with what one Canadian sports writer called “controlled recklessness.” But as a veteran her role has evolved. She is now looked to for intelligent, disciplined hockey at both ends of the rink, to forecheck, use her size to control the ice, dig loose pucks out of corners, fight for position in front of the opponent’s net, kill penalties, and create opportunities for her teammates.