Carolyn Dever, dean of the College of Arts and Science at Vanderbilt University, has been appointed Dartmouth’s provost. Dever, a scholar of gender studies and 19th-century British literature and culture, brings more than a decade of leadership experience in higher education administration, a strong commitment to teaching, and a record of academic accomplishment. 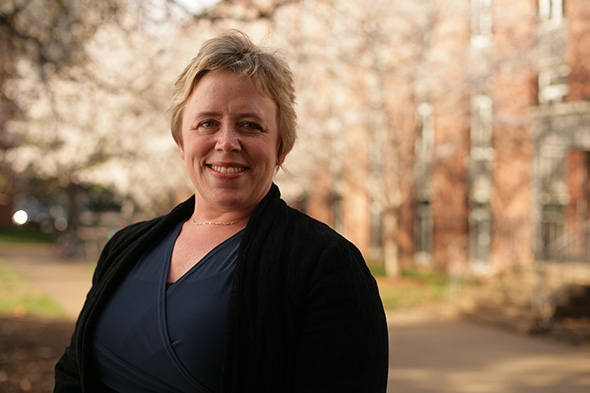 Carolyn Dever, a scholar of gender studies and 19th-century British literature and culture, is dean of the College of Arts and Science at Vanderbilt University. (Photo courtesy of Carolyn Dever)

She will report directly to President Phil Hanlon ’77, serving as a key member of his leadership team. As the College’s chief academic officer, Dever will be instrumental in long-range institutional planning and implementation, including the integration of academic and student-life programs. She will begin work as provost on July 1, 2014.

“I am delighted to welcome Carolyn to Dartmouth,” says President Hanlon. “She is an eminent teacher and scholar who brings a depth of experience in higher education administration to this key leadership position.”

Dever was appointed Vanderbilt’s Arts and Science dean in December 2008, leading the largest and most academically diverse school within the university and the school that represents the university’s core liberal arts mission. As dean, she is responsible for 45 academic departments and interdisciplinary programs; 13 research centers in the natural sciences, social sciences, and humanities; 382 tenured or tenure-track faculty; 800 staff members; and a $180 million annual budget. She also played a substantial role in Vanderbilt’s $1.94 billion capital campaign, which was completed on June 30, 2011.

“I am honored by this appointment and eagerly anticipate the opportunity to work closely with President Hanlon and the Dartmouth community to help shape the College’s future,” Dever says. “Great institutions such as Dartmouth play a unique role as they balance the twin aims of teaching and discovery, pushing the frontiers of knowledge while nurturing the potential of young minds. I both admire and personally share Dartmouth’s commitment to this mission.”

At Vanderbilt, Dever was deeply involved in advancing the institution’s academic aspirations through faculty hiring and the development of new academic programs. She initiated regional and national partnerships to develop postdoctoral positions in the humanities. To support faculty and student diversity, she created partnerships with several historically black colleges and universities. She was also involved in protecting undergraduates’ health and safety by helping to create an integrated “living-learning environment” that spans the entire campus.

The provost is Dartmouth’s second-ranking officer and, in consultation with the academic deans, is directly responsible for supporting and advancing the teaching and the scholarship of the Faculty of Arts & Sciences, the Tuck School of Business, Thayer School of Engineering, and the Geisel School of Medicine. Working with the Dean of the College and academic deans, the provost also has responsibility for supporting and advancing all student-related programs. In addition, the provost has significant fiscal oversight and works closely with the executive vice president to manage the academic budget.

“Carolyn stood out among a deep and rich pool of applicants,” says Duthu. “She demonstrates a profound faith in the power of education to transform lives and a belief in the civic imperative to make the academy—and certainly Dartmouth—accessible to the most promising students, regardless of their means. The committee and I could not be more pleased to welcome Carolyn as Dartmouth’s next provost.”

Dever will take over for Martin Wybourne, vice provost for research and the Francis and Mildred Sears Professor of Physics, who has served as interim provost since July 2012, when former Provost Carol Folt was asked to serve as interim president following President Emeritus Jim Yong Kim’s election as president of the World Bank.

A professor of English, Dever is the author of two books on literary criticism and gender studies, has edited two others, and has several active research projects under way. Before joining the Vanderbilt faculty in 1999, she was a tenured faculty member at New York University. At Vanderbilt, Dever has continued to teach while serving as dean.

Dever will be joined in Hanover by her husband, Paul Young, who will be a professor of film and media studies at Dartmouth, and their 4-year-old son, Noah.