Dartmouth Gets $8 Million to Research Arsenic and Children

An $8 million grant is taking Dartmouth’s assault on arsenic toxicity to a new level. Jointly funded by the National Institute for Environmental Health Sciences and the U.S. Environmental Protection Agency, this five-year grant enables the Children’s Environmental Health and Disease Prevention Research Center at Dartmouth to extend its scope and intensify its mission. 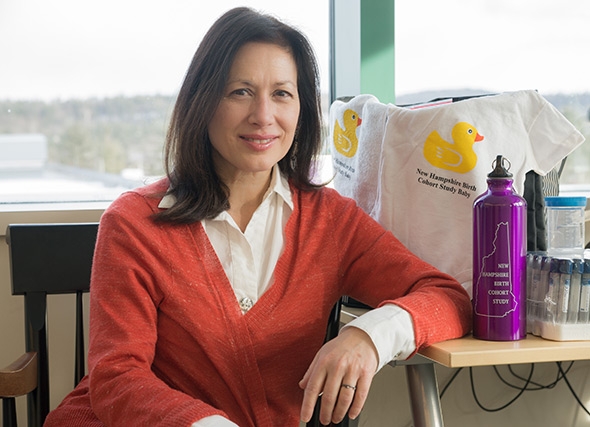 Margaret Karagas is the director of the Children’s Environmental Health and Disease Prevention Research Center at Dartmouth and a professor of community and family medicine at the Geisel School of Medicine. (Photo by Eli Burakian ’00)

“With the expansion of the center, we will have the opportunity to deepen our understanding of environmental exposures to common contaminants such as arsenic during fetal development and childhood and the impact these exposures have on childhood immunity, growth, and neurological development,” says Margaret Karagas, director of the center. Former Interim President Carol Folt, now Chancellor of the University of North Carolina at Chapel Hill, is associate director of the center and a project co-investigator.

Dartmouth’s interest in the effects of arsenic toxicity on the young has its roots in studies initiated in 2009. These ongoing studies began with a group of pregnant New Hampshire women who obtained their household water from a private well in areas where some of the water supplies have been found to be arsenic laden. The offspring of the women will also be studied to determine how these children might be affected over time by relatively low-level arsenic exposure.

“The center will conduct research that can help us develop and implement strategies to prevent diseases associated with arsenic and other exposures in children,” says Karagas, a professor of community and family medicine at the Geisel School of Medicine.

Dartmouth is leading this multidisciplinary research effort in collaboration with colleagues at Stanford University, Harvard Medical School, and the University of Miami, who are bringing in additional expertise in areas such as immunology, neurobehavioral assessment, and molecular and cellular biology. Approximately 15 percent of the grant monies will support the work of these collaborators.

Karagas says that the center’s mission is to identify and address key emerging issues related to health impacts of early life environmental exposures. “There is growing research connecting exposure early in life to a number of prevalent and life threatening diseases for children,” she says. “Moreover, early life exposures and their effects also appear to extend beyond childhood.”

Evidence suggests that environmental exposure may affect the development of the immune system, and in turn infant risk of emerging diseases such as allergies and asthma, she says. Diseases known or suspected to be caused by or aggravated by arsenic in drinking water include various cancers as well as cardiovascular disease.

“Additionally, risk of obesity, which has greatly increased in prevalence in both children and adults, is influenced by factors occurring early in life,” says Karagas. “Therefore, if environmental contaminants increase early life growth, they will heighten risk for obesity which is a major risk factor for cardiovascular disease and cancer.”

John Moeschler serves at the Child Health Specialist for the center, and Carolyn Murray directs the Community Outreach and Translation Core to ensure research findings are communicated with key stakeholders including the medical community and the public.
Written by
Joseph Blumberg
Share this
FacebookTwitterEmail
In the News