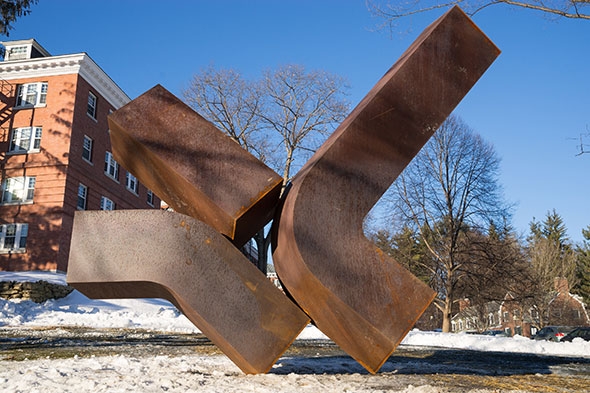 Newly installed on campus is “Perdido,” a 1978 sculpture by Clement Meadmore. It is a gift from Suzette and Jay R. Schochet, Class of 1952. (Photo by Eli Burakian ’00 )

Permanently installed January 8 at the corner of East Wheelock Street and Observatory Road, Perdido stands over 15 feet tall and reflects Meadmore’s love of minimalism and abstract expressionism. Meadmore, who died in 2005, is known for the large-scale outdoor sculptures he created after moving to New York in 1963.

“Clement Meadmore is such a fabulous sculptor,” says Michael Taylor, director of the Hood Museum of Art. “He does amazing work with COR-TEN steel, which is extremely heavy and durable. I was struck by this piece immediately because it didn’t appear heavy. Instead it was seemingly airy and light.

“We chose this installation site because the open space allows the sculpture to resonate with Dartmouth’s architecture and green landscape,” he says.

A gift from Suzette and Jay R. Schochet, Class of 1952, the sculpture lends itself to multiple interpretations. Composed of three geometric steel beams, Perdido has public walkways all around it, allowing passersby to view it from 360 degrees, with its appearance changing at every angle.

“Not only does it play beautifully with the trees, but it also complements the industrial patina of Dartmouth’s buildings,” says Taylor.

“Our mission at the Hood is to bring important works of public art to the Dartmouth campus. I truly believe Perdido will do just that.”