With financing from the Office of the Dean of the Faculty’s Scholarly Innovation Fund, as well as support from the Dartmouth Library, Spitta and Baron worked with Teo Allain Chambi, the grandson of the photographer and director of the Chambi archive.

Spitta’s exhibition of Chambi’s photos, “Interventions in the Archive,” will be held in Cuzco from September 15 to October 18, 2014. The photographs will be enlarged and hung around the city, “in the very spaces where Chambi took them almost 100 years ago,” says Spitta, the Robert E. Maxwell 1923 Professor of Arts and Sciences. 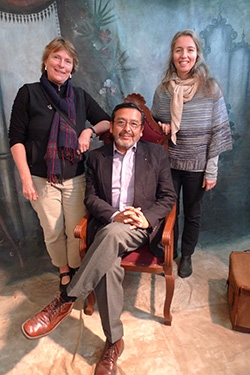 From left, Professor of Spanish and Comparative Literature Silvia Spitta, director of the Chambi archive Teo Allain Chambi, and Dartmouth librarian Jill Baron. The three are shown in front of one of the backdrops used by Martín Chambi in his Cuzco photography studio. (Photo courtesy of Silvia Spitta)

These photos document life in Cuzco from 1920-1950, and capture everything from snapshots of street vendors, to formal studio portraits, to photographs of important Incan sites such as Machu Picchu and Sacsayhuaman.

Chambi’s photos have drawn steady interest from scholars and photographers worldwide since a 1979 retrospective of his work at the Museum of Modern Art in New York City. In addition, some of his images were recently on display in the Seattle Art Museum’s exhibition, “Peru: Kingdom of the Sun and the Moon.”

Spitta has been researching indigenism and visual culture in Cuzco’s archives for several years: there is, she says, “danger of losing an invaluable record of the modernization of this fabulous Incan city.”

Teo Allain Chambi, a noted photographer in his own right, had already catalogued 5,000 of his grandfather’s larger images. But nearly 700 boxes of the glass plate negatives remain in the archive and “have practically never been seen,” says Baron.

She helped to organize the digitization of these small format glass plate negatives, using digital asset management software and working with Chambi to develop consistent metadata terms that will help scholars more easily locate the photos.

Baron, who processed Latin American archival collections at Princeton University prior to coming to Dartmouth in 2012, was thrilled to work on the project. 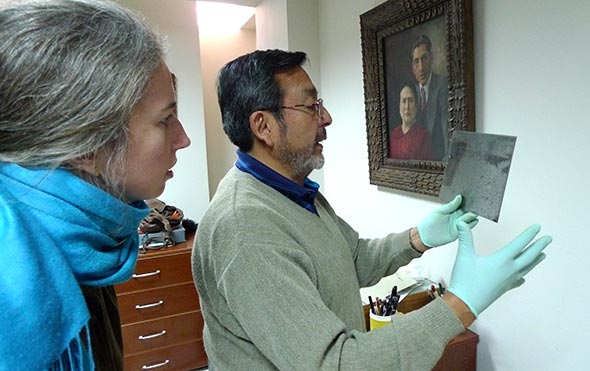 Dartmouth librarian Jill Baron worked with Chambi to organize and catalog more than 40,000 glass-plate negatives in the Chambi archive. Baron says, “It was deeply moving to be in the place where the photographs were created and the legacy actively maintained.“ (Photo by Silvia Spitta)

“At Princeton, the materials that I processed were interesting and often significant, but they came in boxes from very distant places, completely divorced of their context,” says Baron. “In the Chambi Archive, on the other hand, the photographs refer to the surrounding environment and also contain the history of this family of photographers. This made the experience all the more meaningful and personal.”

Jeffrey Horrell, Dartmouth’s dean of libraries and librarian of the College, says the library was happy to assist with the project. “The Dartmouth Library’s mission is to support and engage with faculty and students in their research and this is an excellent example of just such a collaboration,” he says.

The Department of Spanish and Portuguese is setting up a fall 2015 Language Study Abroad for Cuzco, an Andean city of nearly 350,000 residents that was once the Incan Empire’s capital. The archive project, Spitta says, “is a wonderful way of building connections and bridges.”