Susan Ackerman, a professor of women’s and gender studies, the Preston H. Kelsey Professor of Religion, and a professor of Jewish studies, began a three-year term as president of the American Schools of Oriental Research (ASOR) on January 1, 2014. ASOR is an international consortium of institutions that supports and promotes research related to the cultures, history, languages, and archeology of the Near East. 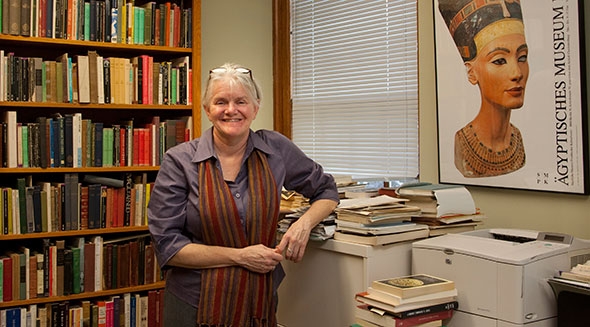 On January 1, Professor Susan Ackerman ’80 began a three-year term as president of the American Schools of Oriental Research. (Photo by Joseph Mehling ’69)

“Being asked to serve as president of the American Schools of Oriental Research is but one of the many honors that Dartmouth faculty who work in the world of the eastern Mediterranean and western Asia have recently received,” says Ackerman, citing the 2013 Archaeological Institute of America’s Gold Medal Award given to Jeremy Rutter, the Sherman Fairchild Professor Emeritus of the Humanities and professor emeritus of classics. She also notes that Associate Professor of Religion Kevin Reinhart is president of ARIT, the American Research Institute in Turkey.

“It’s a real testimony to Dartmouth’s ability to nurture, support, and sustain top-rate scholars that our faculty receives this kind of recognition,” she says.