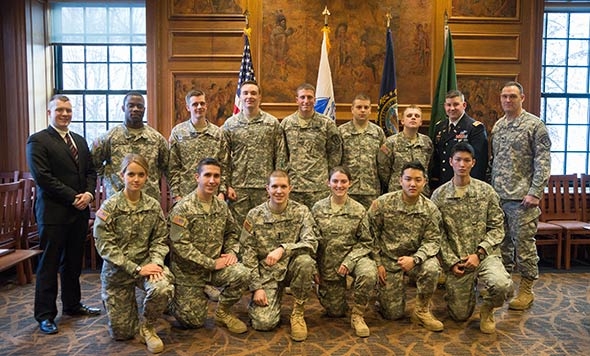 As it has since 1985, Dartmouth’s Army Reserve Officer Training Corps program holds drills and classes on campus in Hanover, under a participant agreement with Norwich University, a military college in Northfield, Vt.

Capt. Gregory Wortman, the director of Dartmouth’s ROTC program, administered the oath to the cadets. Col. Stephen Smith, the commanding officer of Norwich’s Corps of Cadets, attended the ceremony, as did members of the cadets’ families.

Wortman joined Dartmouth this month following deployments in Iraq (2006-07) and in Kuwait, Bahrain, and Qatar (2010-2012). His last duty station was with the 327th Signal Company at Fort Meade, Md., where he provided communications support to the president, vice president, Joint Chiefs of Staff, secretary of defense, and governmental agencies.

“Our job in the ROTC department is to continue to fine-tune the leadership skills of the ROTC student in order to produce a top-notch military officer who is capable of excelling in any environment,” Wortman says. “The ideals and values that the students learn while participating in our program will serve as a building block for a successful future within the military, government, or business community.

“Dartmouth is already known for producing the best and brightest scholars and leaders. Our goal is to pair that with the profession of military service in order to continue this legacy of excellence.”