Dartmouth Subtleties Tour Canada, With a Bit of Embassy Help

The Dartmouth Subtleties, an all female a cappella group, spent winter break on its first international tour, courtesy of the American Embassy in Ottawa. 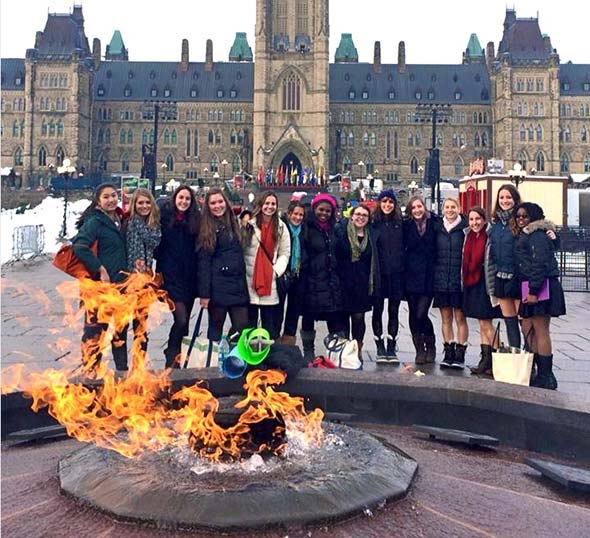 In Ottawa, the Dartmouth Subtleties gather near the Centennial Flame on Parliament Hill. (Photo by Kathryn Page ’14)

“We did many shows in Canada, with a wide variety of audiences,” says Autumn Chuang ’16, president of the group. “In the past, a tour often consisted of concerts at many universities. This year, we were asked to sing at venues such as the British High Commission, the American Embassy, the Ottawa Hospital, and the Elmwood School for Girls.”

Without the embassy’s help, the Subtleties’ trip would not have been possible. Last summer, the executives of the group applied for a grant through the Cultural Affairs section of the U.S. State Department, and the American Embassy in Ottawa provided funding to cover the group’s travel expenses.

“Our group is one of the youngest on campus. We were so lucky to receive the embassy’s grant,” says Chuang. “It allowed every member of the group who was able to go to participate in the tour this year and enjoy the experience of traveling out of the country.”

While in Ottawa, the Subtleties served as arts ambassadors to Canada, representing the Dartmouth community and the United States on their trip.

“The Subtleties have come a very long way in the past couple of years. Even though I’m just a sophomore, it’s easy to see how much our hard work has paid off. We hosted Spring Sing last year, and getting the chance to follow that up with an international tour allows us to continue to ride our momentum to future success,” says Chuang.

Founded in 1998, the Dartmouth Subtleties are known for using a cappella to unite people through music. They were one of the first groups on campus to add vocal percussion to their sound.

The Subtleties will perform at the Special Olympics at Dartmouth Skiway at 9:30 a.m. on January 25. The group will kick off the games by singing the national anthem.

Editor’s note: Emma Steele ’14 is a member of the Dartmouth Subtleties.