With a running total of $289,880, the Dartmouth United Way campaign has surpassed its all-time fundraising record and is within striking distance of the $300,000 goal. 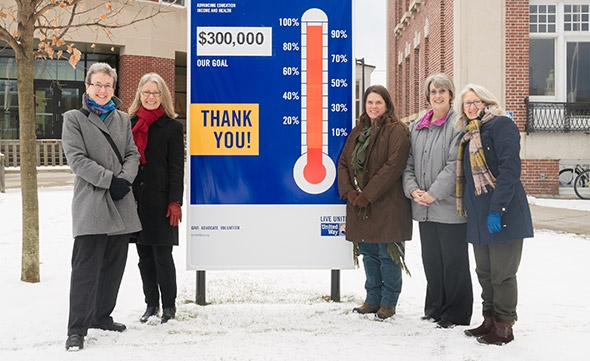 “This 40th anniversary campaign has broken a number of records already, and we’re within $10,000 of reaching our goal,” says Gail Gentes, campaign co-chair and the wife of President Phil Hanlon ’77. “We’re excited about all the benefits to the community this largest-ever Dartmouth campaign goal will bring.”

Chip Souba, campaign co-chair and dean of the Geisel School of Medicine, points to the urgent needs served by United Way.

It’s Not Too Late to Pledge

People who donate to Dartmouth United Way before January 17 will be in the running for the final weekly raffle prize, a $30 gift certificate to Murphy’s Restaurant in Hanover.

Everyone who has pledged to the Dartmouth campaign is in the running for one of the three grand prizes: two nights’ accommodations at any Second College Grant Cabin, provided by the Dartmouth Outdoor Programs Office; one night’s accommodations, with free parking and breakfast for two, at the Hanover Inn; or one adult season pass to Whaleback Ski Area.

To be eligible to win, pledges must be received before the final drawing on January 24.

“This bitter cold winter has brought increased hardships for many of our neighbors in the Upper Valley,” Souba says. “The good news is that more people at Dartmouth—including 217 new donors—have stepped up this year to help improve the lives of those who are struggling. This unprecedented Campaign has reached 97 percent of its goal, but there’s more work to be done.”

The previous fundraising record, set during the 2011 campaign, was $285,412. Dartmouth’s effort also led the fundraising for all of Granite United Way.

Gentes and Souba stress that the final $10,000 of the drive will help extend services to hundreds more people and families in the Upper Valley. They remind everyone at Dartmouth who has not pledged yet that it is not too late.