Wole Ojurongbe, MALS ’08, director of Dartmouth’s Master of Arts in Liberal Studies (MALS) program, keeps a bookshelf in his Wentworth Hall office reserved for works published by authors associated with the program. Dartmouth Now asked Ojurongbe for a sample of works by MALS faculty, alumni, and current students. “It’s been difficult narrowing it down to just a few titles, but that’s a really good problem to have, I think,” he says. 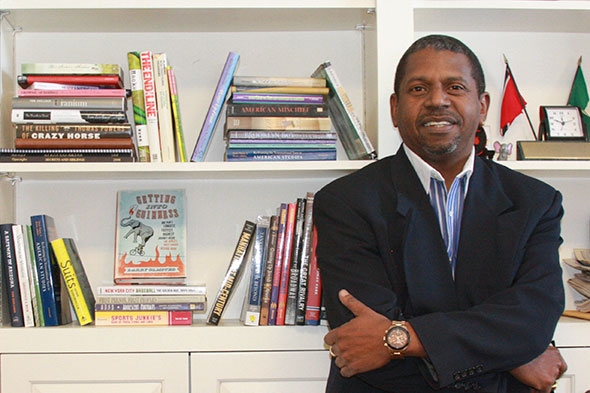 Wole Ojurongbe, MALS ’08, director of Dartmouth’s Master of Arts in Liberal Studies program, has a collection of books written by MALS authors associated with the program. (Photo by Corinne Arndt Girouard)

Creative writing is one of the specializations offered in Dartmouth’s MALS program (other tracks in addition to the general liberal studies program include cultural studies and globalization studies), although Ojurongbe notes that the Dartmouth program is different from an MFA (master of fine arts) degree, and intentionally so: “The MFA is considered a terminal degree,” he points out, “while many MALS students continue on from their masters-level studies. And generally speaking, the MFA tends to be a technique-focused degree; our MALS writers often want to make room for in-depth research on the subjects they write about.”

“Here are a few MALS books, by no means an exhaustive list,” he says.