An Engineer and an Olympian 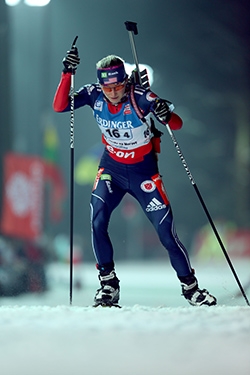 Hannah Dreissigacker ’09, Thayer ’10, is making her Olympic debut at the Sochi Games. (Photo courtesy of Nordic Focus)
Read the full story by Anna Fiorentino, published by Thayer School of Engineering.

For Hannah Dreissigacker ’09, Thayer ’10, growing up was marked by national sports competitions and new ideas. Her engineer parents Judy Geer ’75, Thayer ’83, and Dick Dreissigacker, both former Olympic rowers, were always building homemade versions of things and Dreissigacker learned that everything has the potential to be improved. In January, that lesson resonated as she crossed the finish line in the final qualifying race to earn her spot on the U.S. Olympic Biathlon Team in Sochi.

“I was incredibly nervous going in, but I had a good first race and was the top American, and that helped me relax,” says Dreissigacker. “It’s still sinking in that I’ve actually made the team, and I am so psyched!” She will be racing in the women’s 7.5-kilometer sprint on February 9, the women’s 15-kilometer individual on February 14, and the women’s relay on February 21—other races could be added later.

Dreissigacker, who began skiing at age 3, has a family tree full of Dartmouth engineers. Along with her mother is her grandfather Howard Geer ’39 and her brother Ethan Dreissigacker ’13 who also competes nationally in the biathlon. Her sister Emily Dreissigacker ’11, who earned an economics degree, is a competitive rower.

“Dartmouth is a big family school on my mom’s side of the family, but I chose it for my own reasons,” says Dreissigacker, who earned a combined degree in engineering and studio art. “The school has a really good ski team so that was a huge plus, and I liked the project-oriented focus at Thayer.”