Folk singer Pete Seeger, who died January 27 at age 94, was no stranger to Dartmouth. He sang at the College a number of times and, say faculty members, has been an influence on their work, and in their lives. 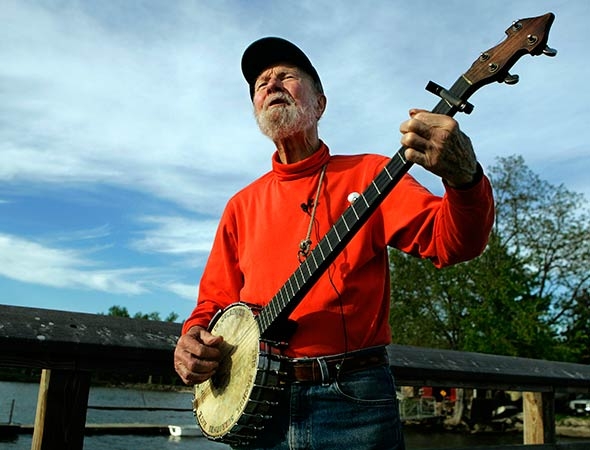 Folk singer Pete Seeger performed a number of times at Dartmouth and there is a segment of his work preserved in the online Dartmouth Jewish Sound Archive. (Photo by Frank Franklin II/ Associated Press)

Seeger played 105 Dartmouth Hall in 1957 and by 1968 he was making at least his fourth appearance in Hanover, a benefit on campus for the Upper Valley Human Rights Council.

The cover of the 1957 Smithsonian Folkways album Jewish Children Songs and Games notes the participation of “p. seeger+banjo” accompanying Yiddish cultural researcher and activist Ruth Rubin. And, Glinert says, “I’d bet Pete Seeger and Shlomo Carlebach—later famous as ‘the guitar-strumming Rabbi’ and a transformative influence on Jewish sacred music in America and around the world—played together in Greenwich Village,” long before both performed at the Berkeley Folk Festival in 1966.

Says Steve Swayne, professor of music, “Seeger, the son of a musicologist and the stepson of a composer, reshaped our nation through his songs. Even those of us who work in music sometimes forget its power to change the world, for good and for ill. Seeger showed us all how to work for good through music.”

Other faculty talk about Seeger’s legacy:

Writer Jeff Sharlet: “When the House Un-American Affairs Committee interrogated Seeger in 1955, he didn’t plead the Fifth, he declared the First, and then he sang a song. It won him a prison sentence of a year.“

”It’s right to recall Seeger’s kindness, but we shouldn’t forget that Seeger was an angry man, too. It was what he did with that anger that made him one of the great democratic artists of our times, and our parents’ times, and our grandparents’ times.”

Sharlet, the Mellon Assistant Professor of English, includes a chapter on Seeger and fellow Weavers member Lee Hays’ iconic “If I Had A Hammer,” in Hammer Songs, Sharlet’s work-in-progress book on secret political histories behind popular American songs.

Historian Annelise Orleck: “A collector and player of myriad streams of American folk music, a voice of conscience through World War II, the Red Scare, the civil rights movement and the anti-war movement, and as an environmental activist more responsible than almost anyone for saving the Hudson River and its environs, Pete Seeger is one of the towering (literally, at 6’2“) figures in 20th century progressive politics. Seeing him perform, an occasion when everyone in the audience would always end up singing, was more effective at galvanizing people to activism than almost any conventional speaker.”

Professor of History Orleck is co-editor of The War on Poverty: A New Grassroots History.

Musicologist Ted Levin: “As an aspiring teenage banjo player in the 1960s, I learned from Pete Seeger that music didn’t have to be about competition and virtuosity, but could celebrate community and participatory music making. For me, this was a revelation, and set me on the course toward my lifelong passion, and ultimately, profession, of studying the folk and traditional music of other cultures.”