Tillman Gerngross, a professor of engineering and the associate provost of entrepreneurship and technology transfer, has been named a 2013 National Academy of Inventors (NAI) Fellow. 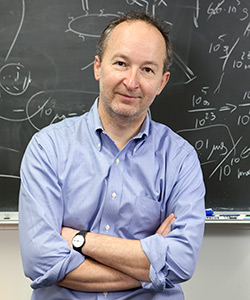 Professor Gerngross will be inducted into the National Academy of Inventors in March. (Photo courtesy Thayer School of Engineering)

NAI Fellow status is granted to academic inventors who have demonstrated a prolific spirit of innovation in creating or facilitating inventions that have made an impact on quality of life, economic development, and the welfare of society. The 143 new Fellows represent 94 universities and research institutes and together hold more than 5,600 U.S. patents.

Gerngross—teacher, scholar, and serial entrepreneur—built his first startup, GlycoFi, around an invention that most experts said couldn’t be done: a genetically engineered yeast strain that produces fully human glycoproteins. Merck & Co. acquired GlycoFi for $400 million in cash just six years after the filing of the first patent. The new yeast not only increases production capacity for therapeutic proteins, but also makes it safer, more effective, and cheaper to produce these important drugs.

Gerngross has gone on to start four more companies—Adimab, Arsanis, Avitide, and Alector—all dedicated to translating research at the interface of engineering and medicine into new and improved methods for treating disease. The latest, Alector, aims to discover antibodies in one of the areas of highest unmet medical need: Alzheimer’s and related neurodegenerative diseases.