Sixteen professors from departments including art history, environmental studies, and mathematics contributed to the Office of Alumni Relations’ ninth edition of “Good Reads.” The books cover fascinating moments in history, such as the plans in the 1950s to develop a hydrogen bomb-powered spaceship, the creation of the Rockefeller Center, George Mallory’s ascent of Mount Everest, and the rise and fall of the Comanche. For fans of fiction, there are three mystery novels about Southern Europe and a tale of a young girl’s care of a precious 14th- century document. Meanwhile, an environmental philosophy book “rescues the notion of sustainability from the traps of technological optimism and vapid buzzword.”

Below, Susan Ackerman ’80, the Preston H. Kelsey Professor of Religion, shares her thoughts on Snake Road by Sue Peebles. 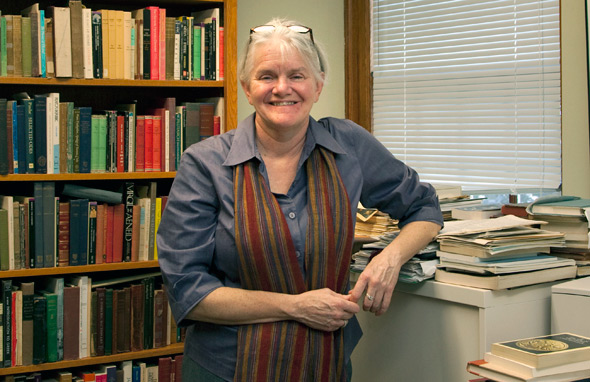 “I spent the autumn in Edinburgh, Scotland, on the religion department foreign study program, and so I have been reading (among other things) Scottish fiction. I can particularly recommend Snake Road, although be warned, it’s bleak. It’s the story of how multiple generations of a Scottish family—and especially the family’s women—suffer from the heart-wrenching experiences of miscarriage and dementia during the dark and dank days of a Scottish winter. Still, the loving portrayal of the grandmother, as her mind goes further and further adrift, is as moving an account of senility as one could hope to read, and by the last pages, the novel has a happy ending—or at least as happy an ending as is possible for a bereft family in a barren time.”