This weekend’s performances of Hospital—a play about the realities of contemporary health care—cap a connection to Dartmouth, and the conjunction of art, health care, and social action that predate a full slate of classroom visits, discussion sessions, and encounters among Hospital’s actors, Dartmouth students, and the public during the artists’ current week-long residency in Hanover. 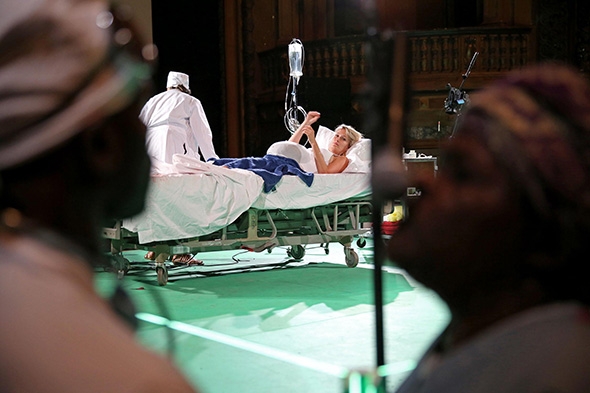 Performances are at 8 p.m., on Friday and Saturday, January 17–18, in the Hopkins Center’s Moore Theater. Both performances will be followed by “Spotlight” discussions with the artists.

Mirroring health-care television drama and reality programing, the play is a collaboration between the Los Angeles Poverty Department (LAPD), based in Los Angeles, whose actors include people who have experienced homelessness, and Wunderbaum, a Rotterdam, Netherlands, theater group which, like LAPD, tackles critical social issues. The performance is the first in the nation featuring primarily people who have experienced homelessness.

Hospital has roots in 2013 meetings held in Hanover between LAPD founder John Malpede and individuals connected with The Dartmouth Center for Health Care Delivery Science (TDC), the Geisel School of Medicine at Dartmouth (including physicians, researchers, and medical students), as well as Dartmouth faculty and administrators from sociology, government, writing and rhetoric, and the Nelson A. Rockefeller Center for Public Policy and the Social Sciences.

Connections were made as well with social service groups from the Upper Valley and beyond, including the Upper Valley Haven, the Good Neighbor Health Clinic, and Boston Health Care for the Homeless. Those discussions—sparked by Hopkins Center Programming Director Margaret Lawrence—added Dartmouth-based research to the artists’ personal experiences with the health care system, which the play explores. Hospital comes to Hanover from performances in Los Angeles, Rotterdam, and Minneapolis.

The Hospital team’s residency at Dartmouth, from January 12–19, includes visits to courses in women’s and gender studies, sociology, and writing and rhetoric, as well as a public panel discussion, hosted by the Rockefeller Center, about economic and social disparities in health care and access in a community context.

Exchange and research on local health care linked to the artists’ residency continues as LAPD members join a weekly community dinner at the White River Junction, Vt., LISTEN Center, where they will perform a scene from Hospital and gather stories of encounters with the health care system. Those experiences will be shared, says the Upper Valley Haven’s Sara Kobylenski, with ReThink Health UVRC, a group addressing wellness and health care in the Upper Valley.