While participating in the 2013 fall term Language Study Abroad Plus Program in Beijing with 10 of his fellow Dartmouth students, Jake Gaba ’16 spent 30 hours a week in the classroom studying Mandarin. In his spare time, he did a lot of sightseeing with the group, and a whole lot of dancing. 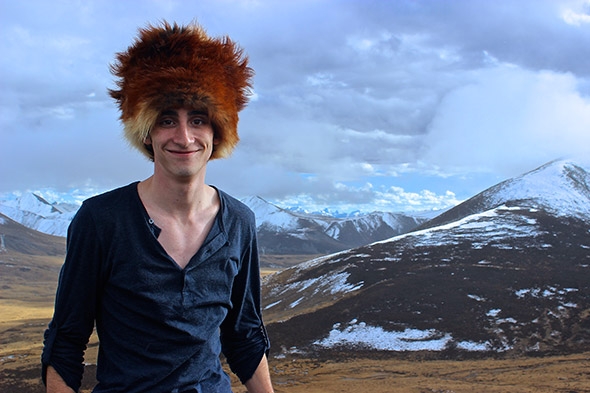 Jake Gaba ’16 filmed “Guy Dances Across China in 100 Days” while he was participating in a Foreign Language Study Abroad Plus Program. (Photo courtesy of Jake Gaba ’16)

Gaba danced while posing with the Terracotta Warriors, moonwalked around Beijing Normal University, and did the robot atop a mountain in Lhasa (Tibet). A video he filmed of his dance exploits, “Guy Dances Across China in 100 Days,” has been viewed more than 4,500 times in the two days since it was posted to YouTube, and today it was shown on ABC’s Good Morning America.

What inspired this unique travelogue? “I had made an album of selfies when I went to Israel last summer, and my friends were asking for a ‘Selfies, Part Two,’” says the computer science major from Dallas. “But my friend Nash Larmoyeux ’15 showed me Nathan Barnatt’s videos, and I decided to do something like that. So when we went to the Great Wall our second weekend, I brought the tripod and clothes. I knew it had to be ridiculous, and that it had to stand out.” Watch the video here.

With technical assistance from Shannon Draeker ’16 and wearing the finest of Dartmouth flair—a pair of rainbow-checkered swim trunks he had bought at the Dartmouth Co-Op—Gaba set up the camera, put in his earbuds and listened to Bruno Mars’ Treasure while dancing his way across China. He attracted onlookers wherever he danced, all eager to photograph and film him with their cellphones. And he even got assistance from a security guard in a crowded train station.

“There were about 400 people waiting in the station and I started dancing,” says Gaba, who is a member of the a cappella group Sing Dynasty and the Northern Lights circus club. “And this security guard protected my camera from the crowd while I danced. So I had the authorities on my side. There were a couple of places I didn’t dance, like a temple in Tibet, because I thought it would be disrespectful. By late October, everyone kept asking me in Chinese, ‘Are you cold?’”

Gaba spent about 15 hours editing the video, which is something he regularly does at Symbiotic Studios, the recording and video production business he founded with Devon Koch ’16 at Dartmouth during the 2013 winter term.

In addition to posting to YouTube, Gaba has submitted his video to The Ellen DeGeneres Show. “I really want to dance with Ellen. That’s my dream. And I want Bruno Mars to tweet it. We’ll see what happens.”