Retired General Carter Ham, who rose through the ranks from enlisted man to a four-star general leading the U.S. Africa Command during a time of rapidly shifting strategic challenges, has begun a two-week residency at Dartmouth’s Dickey Center for International Understanding. 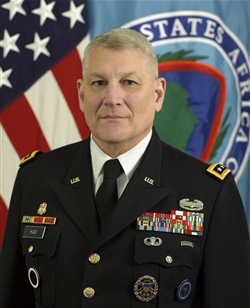 Retired General Carter Ham will participate in three public events during his two-week residency at Dartmouth. (Photo courtesy of the United States Department of Defense)

Ham’s Africa command coincided with spreading violence and terrorist activity in North Africa following the Arab Spring, the rise of jihadists in Nigeria, U.S. action in Libya, and most recently, the deadly attack on the U.S. Mission in Benghazi, Libya. In addition, when Ham was Commander of the U.S. Army in Europe, he led the Pentagon review regarding the repeal of Don’t Ask, Don’t Tell.

Ham has been an outspoken advocate for the diagnosis and treatment of post-traumatic stress disorders among serving troops, “which distinguished him among the flag officers,” says Daniel Benjamin, the Norman E. McCulloch Jr. director of the John Sloan Dickey Center for International Understanding. Ham’s experience had been colored by his own experience with PTSD after a suicide bombing in Iraq.

Monday, February 3, 4 p.m., Haldeman 041: General Carter Ham will speak on “A Life in the Military,” reflecting on the changes and history he witnessed over his nearly 40-year military career, rising from an enlisted man to a four-star general.

“I found him to be an extraordinarily broad-minded and thoughtful military leader,” says Benjamin. “He’s really had a remarkable career, and he has this unique perspective, coming from the enlisted ranks. He’s seen a tremendous amount of change in the military and the country during his 40 years of service.”

Benjamin says the Dickey Center is putting a particular emphasis on extended visits from senior policymakers. “As we saw with the visits of former Under Secretary of State Maria Otero last spring and General Jim Mattis in the fall, this allows for many more close-up engagements with students and a far richer experience than if these individuals simply came and gave a speech.”

“General Ham is teaching half a dozen different courses, he will meet with a lot of different student groups, and he will also be meeting with our Dickey Fellow post-docs. He’s a unique asset for them.”

Ham will hold his first public event tonight, January 30, from 4:30 to 6 p.m. in Filene Auditorium, where he will discuss “Politics, Security, and Economics in Africa,” joined by Ambassador Johnnie Carson, former assistant secretary of state for African Affairs.