Journalist John Quiñones says the movement led by Martin Luther King Jr. and the federal War on Poverty that followed opened the door for his success as an ABC News correspondent and the anchor of the newsmagazine What Would You Do? 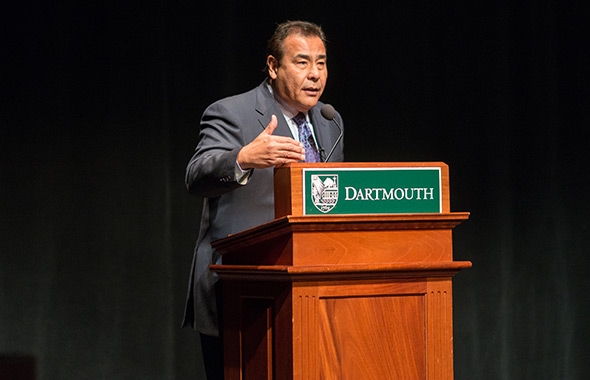 It was the federal Upward Bound education program that allowed a poor Latino kid from San Antonio, who spoke only Spanish on his first day of school and was a migrant worker as a teen, to get access to college preparatory classes. The program also opened the door for him to attend Columbia School of Journalism.

Quiñones, the keynote speaker Monday night at Dartmouth’s Martin Luther King Jr. celebration, met earlier in the day with staff of the Office of Institutional Diversity & Equity, which organizes the annual events.

Social and gender inequity is the focus of a January 24 and 25 symposium at Dartmouth that coincides with the annual campus celebration of the life and work of Martin Luther King Jr.

Organized by Geisel School of Medicine student members of Physicians for Human Rights and co-hosted by the Nathan Smith Society, Dartmouth’s student-run organization for undergraduates interested in the health professions, symposium sessions address domestic and sexual violence, LGBTQ issues in healthcare, business and human rights, and breaking down LGBTQ stereotypes.

Holly Anderson, assistant professor of medicine at Mount Sinai School of Medicine and assistant professor of public heath at Weill Medical College of Cornell University, will present the symposium’s keynote talk at 12:30 p.m. on Friday, January 24, in the Oopick Auditorium of the Class of 1978 Life Sciences Center.

Speaker biographies and a full schedule of events are available at the symposium website. Friday’s events are free and open to the public. Additionally, the film Wadjda will be screened in conjunction with the symposium at the Loew Auditorium in the Black Family Visual Arts Center at 6 p.m. on Saturday, January 25, with admission charged.

“I’m impressed with the effort I’ve seen today in trying to reach out to kids who normally never have the opportunity to come to a place like this. It reminds me of what Columbia did when I applied to the journalism school,” he said. “Most of their kids came from Dartmouth and Yale and Cornell, and they made a concerted effort, like you’re doing here, to go outside those boundaries to reach out to kids who may never have an opportunity.”

Quiñones’ What Would You Do?, which has been called a Candid Camera of ethics, reflects the principles King espoused when he spoke of people of goodwill rising up against individual incidents of injustice.

“It is about stepping in and speaking out when others are afraid to do so,” he said. “What do you do when the little voice in the back of your head tells you to get involved—that you’re witnessing injustice?”

And in fact, before Quiñones’ address, speaker Jalil Bishop ’14, president of the Afro-American Society, invited members of the audience at The Moore Theater to join him in a demonstration that warned the Dartmouth community against allowing the King holiday to divert attention from the struggle against marginalization and exploitation of minorities. Roughly 30 people joined him on stage, carrying banners and chanting “no justice, no peace.”

After the event, Quiñones told the student newspaper The Dartmouth that he admired the protesters as well as the reception they received.

“It says a lot about this university that they were allowed to go onstage and get their message out,” he told the newspaper. “There are other places where they could have been arrested or pulled off the stage or something ridiculous like that. I hope people will hear and listen, and that somehow there’s a conversation that’s started.” 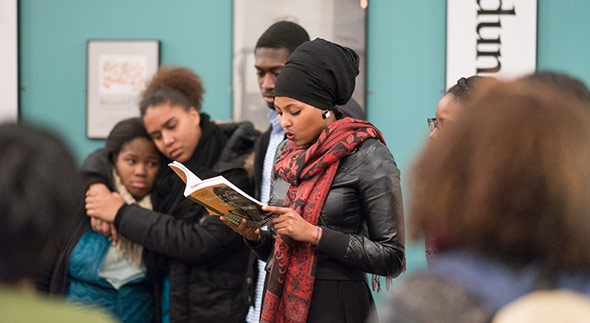 After an onstage protest by about 30 students before the delivery of the keynote address by journalist John Quiñones, a number of students continued a discussion about the event at the Top of the Hop. (Photo by Eli Burakian ’00)

After the demonstration, participants continued discussions upstairs at the Top of the Hop. The day’s events also included an employee breakfast address by Professor Ella Bell Smith from the Tuck School of Business; a candlelight vigil procession sponsored by the Alpha Phi Alpha fraternity; a quilting marathon for refugee relief sponsored by the William Jewett Tucker Foundation; and in 105 Dartmouth Hall, a loop of Martin Luther King’s May 23, 1962, Dartmouth speech, played all day in the very room where he spoke.

Walking into the building during the day, people could hear King’s voice rise from the auditorium:

“It is one thing to rise up with righteous indignation when the Negro is lynched in Mississippi, or when a bus of Freedom Riders is burned in Anniston, Alabama. But a white person of goodwill in the North must rise up with as much righteous indignation when the Negro cannot get a position in his particular firm; or when a Negro cannot join his particular fraternity; cannot join a particular academic society. In other words, there must be a sort of divine discontent if this problem is to be solved.”