More than 150 students volunteered at the Dartmouth Skiway to support the athletes of the 12th annual Upper Valley Winter Special Olympics on January 25. 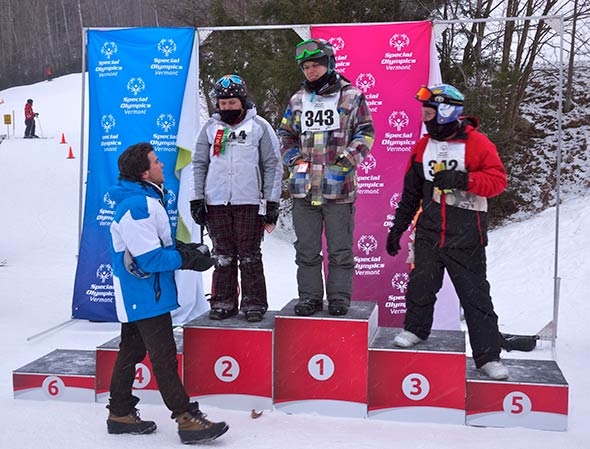 “It’s such a tremendous community event, and 100 percent volunteer run,” says volunteer coordinator Katie Robbins ’85. “We have high school sports teams and Upper Valley residents who volunteer each year, as well as Dartmouth students coming from sport teams, fraternities and sororities, and unaffiliated groups and individuals.”

Founded in 2003 by Pete Bleyler ’61, the winter games were directed by Jim Beattie ’76. This year’s volunteers came from six fraternities and sororities, nine Dartmouth sports teams, and also included other individual students.

“My friend Laura always participates in the downhill skiing competition,” says track and field sprinter Jon Brady ’14 of San Juan Capistrano, Calif. “I didn’t have a meet on Saturday, so I rallied a group of team members to support Laura at the games. I’ve worked the spring games a couple of times and was happy to finally make it to the Skiway as a volunteer.”

During the daylong competition, more than 100 athletes on 13 teams participated in events including snowshoeing, alpine skiing, and snowboarding races. The day concluded with a closing awards ceremony.

“My favorite part of this event is working the awards,” says Molly Lyons ’16, co-chair of the opening and closing ceremonies of the Upper Valley Special Olympics committee.

“No matter how the athletes do in their races, they are always so enthusiastic and genuinely happy to be at the event. I volunteered last year, and will continue to volunteer until I graduate. There are so many tangible rewards for both athletes and volunteers at the games," says Lyons.

Written by
Emma Steele '14
Share this
FacebookTwitterEmail
In the News