Dartmouth’s alumni claim “the still North in their soul” each time they sing the alma mater—but as any of Dartmouth’s Arctic researchers could tell you, Hanover is fairly far south—if you’re measuring from the North Pole. That’s why it’s noteworthy that the aurora borealis, the northern lights, should be visible from Hanover tonight. 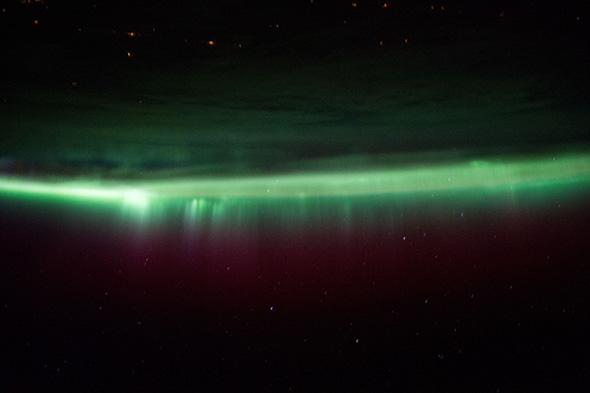 It’s a “fairly reasonable expectation,” says Kristina Lynch, professor of physics and astronomy, who studies the phenomenon. Matter ejected from the sun during a flare on January 7 is reaching the Earth now and interacting with the planet’s atmosphere and magnetic field. A check of data from the ACE satellite, “which is out in front of us in the solar wind,” confirms high levels of activity, she says.

Three factors increase the chances of seeing the aurora when it’s active, Lynch says. The first is a dark and clear sky. “If it’s the sort of night and place where you could see the Milky Way, you’re in good shape.” Second, she says, the later the better. “After midnight, the shape of the aurora makes it more visible farther south.” And third, she says, you need a view north, and as low on the horizon as you can.

Bob Hawley, assistant professor of earth science and an experienced polar researcher, wintered over at Summit Camp in Greenland in 1997-98. The northern lights, he says, were “absolutely amazing to see.”

Hawley says he will probably sleep in tonight, but he has these words to encourage would-be watchers: “The one thing I’d say is that pictures just don’t do them justice, don’t capture how dynamic they are. Think of fast moving clouds, and then multiply that three or four times.”

Dartmouth faculty and students are a frequent presence in northern reaches. Ross Virginia, the Myers Family Professor of Environmental Studies and director of the Institute of Arctic Studies at the John Sloan Dickey Center for International Understanding, says participants in Dartmouth’s Polar Environmental Change NSF IGERT program often see the northern lights during their field seminar in Greenland. “The vast expanse of rolling Arctic tundra and mountains is recreated in the sky as the lights and ribbons of color move across the sky.” And, Hawley recalls, undergraduate earth sciences students taking part in the Department’s travel seminar “The Stretch” in 2011 saw the aurora when the group was in Banff, Canada. “Even that was pretty impressive,” he says.

Lynch spends part of each winter in either Fairbanks, Alaska, or Andenes, Norway, for rocket and balloon launches. Data from a February 2012 launch into the aurora, for instance, is providing data for two current Dartmouth graduate students’ PhDs. But it’s not just the science that makes the aurora compelling: The lights are nearly always there in the far north, she says. And one night out of three, they are “something spectacular, dancing in the sky, in total silence.”

Worth staying up for? “I think so,” she says.