When professors Doug Irwin, Meir Kohn, and Russell Muirhead get together to explain their new Political Economy Project, the interview quickly becomes a free-form conversation that explores the medieval marketplace, the economies of cities, and political responses to the recent financial crisis. 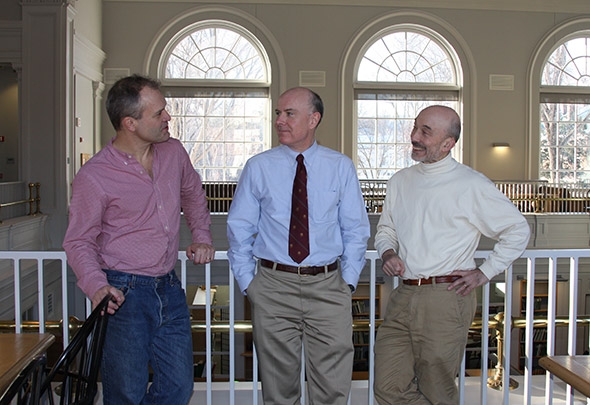 This passion for tackling broad questions about economic and political systems across the disciplines of economics, history, philosophy, religion, and government was the spark for the three to organize the project and line up independent funding. With support from interested alumni and others, the project will help fund course offerings across disciplines, support visiting professors, underwrite debates and lectures featuring prominent speakers, and recruit a post-doctoral fellow, says Irwin, the John Sloan Dickey Third Century Professor in the Social Sciences in the Department of Economics.

Government 20: “The Foundations of Political Economy”

One goal of the course is to familiarize students with foundational thinkers who gave us the discipline of economics: Hobbes, Locke, Rousseau, Smith, Ricardo, Marx, Mill, and Spencer. The final goal is to consider how foundational ideas have shaped political economic debates in America for the past hundred years: Keynes, Hayek, and Schumpeter. Summer 2014, Professor Bernard Avishai

Economics 79: “The Clash of Economic Ideas”

Economics 74: “The Political Economy of Development”

Why are some nations rich and others poor? Answering this question requires an understanding of the process of economic development and growth and also of the obstacles—predominantly political—that are placed in the way. This course develops such an understanding using the evidence of pre-industrial Europe and China and building on the insights of Adam Smith. It then applies this understanding to analyze the problems of developing and developed countries today. Winter 2015, Professor Meir Kohn

“Is capitalism a system of injustice and exploitation, or a system that allows for individual freedom and prosperity? What does it mean to have a fair and just society, the equality of legal rights, or equality in the distribution of resources? The Political Economy Project aims to explore questions such as these,” Irwin says.

Muirhead, the Robert Clements Associate Professor of Democracy and Politics in the Department of Government, points to the Occupy movement. ”It raises a lot of urgent questions about the ethics of our political economy,“ he says. ”Our students want to assess these questions. The idea is to open an academic framework that equips them to address those questions in a disciplined and rigorous way.“

In fact, Irwin and Kohn each have a longstanding tradition of organizing not-for-credit book discussions and dinners on these topics, and unveiled the plan to students at a dinner/seminar this week. Now they will offer classes for credit and the project will enable students, faculty, and visiting speakers and scholars from all disciplines to explore these questions as well.

”Our goal is to inject some energy into the intellectual life at the College as it maps onto the subject of political economy,“ Muirhead says.

The Monday dinners are from 6 p.m. to 7 p.m. at The Nelson A. Rockefeller Center for Public Policy and the Social Sciences.