President Phil Hanlon ’77 and his wife, Gail Gentes, have just returned from their first trip representing the College abroad. “Gail and I are very excited by the opportunities in Europe and elsewhere overseas for Dartmouth,” says President Hanlon. They spent the week in London and took a side trip to Switzerland, returning on January 30. 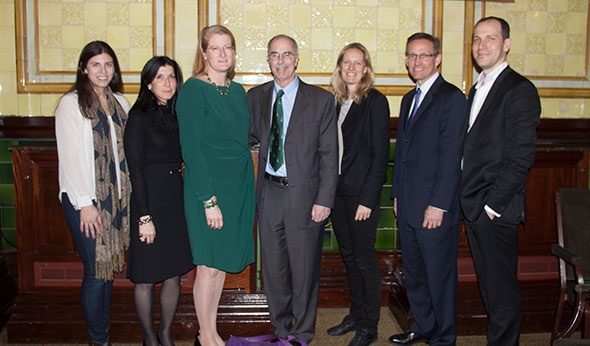 “We felt a tremendous amount of enthusiasm from everyone we met and found a desire from many for greater engagement with the College. This trip was also an opportunity to enhance the College’s visibility and recognition. We hope our efforts will interest more international students to apply to Dartmouth. Their perspectives and the diversity they bring are welcome here,” says the president.

Hanlon and Gentes met with members of the Dartmouth Club of London, spoke to media outlets in the city, and made several private visits. They also spent time with William Legge and his wife, Fiona Campbell. Legge, who also goes by William Dartmouth, is the 10th earl of Dartmouth, and a descendent of the second earl, for whom the College is named.