Former Dartmouth Review editor and outspoken conservative author and critic Dinesh D’Souza ’83 is returning to Dartmouth for a debate with ’60s-era antiwar activist Bill Ayres, one of the founders of the radical Weather Underground. D’Souza is promoting the event as “the ultimate fight between left and right.” 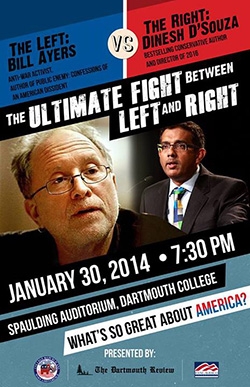 The debate between Dinesh D’Souza ’83 and Bill Ayres takes place on January 30. (Image courtesy of the Dartmouth College Republicans and “The Dartmouth Review.”)

Headlined as “What’s So Great About America?,” the debate shares a title with D’Souza’s 2002 bestseller, which argues for a renewed patriotism in the face of radical internal and external threats to America. The event, at 7:30 p.m. on January 30 in Spaulding Auditorium and video-streamed live on dineshdsouza.com, is being presented by the Dartmouth College Republicans, the Young America’s Foundation, and The Dartmouth Review.

Ayers, the author of Public Enemy: Confessions of an American Dissident, is a retired professor of elementary education theory at the University of Illinois at Chicago. He is perhaps best known as a leader in Weather Underground, formed in 1969 as a self-described “mass revolutionary movement” committed to “violent and illegal struggle” to oppose the Vietnam War. Ayres returned to the public eye during the 2008 presidential campaign when links between his political activism in Chicago and then-candidate Barack Obama came to light.

Nicholas Desatnick ’15, editor of The Dartmouth Review, says D’Souza approached Ayres to appear on his new documentary project, America, and the two came up with the idea of meeting for a public debate at D’Souza’s alma mater.

Though details are still in the works, Ayres and D’Souza will be on campus for other public events and discussions earlier in the day, Desatnick says.

“It’s a fantastic opportunity to see two people with very different views on America and the American Dream together engaging in a constructive and stimulating dialogue,” Desatnick says. “That kind of exchange of ideas is what Dartmouth is all about.”