Seattle Seahawks Take Flight With Son of ‘Harry B.’ ’77

When NFL fans watch Russell Wilson play, they see a talented and personable young quarterback who has led the Seattle Seahawks to the NFC playoffs in each of his first two seasons and is widely expected to lead them to the 2014 Super Bowl title. When Dartmouth alumni from the 1970s watch Wilson play, they see the spitting image of his late father, Harrison B. Wilson III ’77, who was a standout football and baseball player for the Big Green.

“In addition to looking very much alike, they run alike, their mannerisms and their facial expressions are similar, their manner of speaking is similar. So it’s really striking,” says Dartmouth Trustee Benjamin F. Wilson ’73, who was the first of the four Wilson brothers to matriculate at Dartmouth, followed by Harrison, John ’80, and Richard ’85, who passed away in 2005.

What is also striking, but not surprising to former Dartmouth classmates of “Harry B.”(as Harrison was known) is the poise, leadership, and sportsmanship his son Russell demonstrates on and off the football field. “No athlete in Seattle is more popular,” wrote The New York Times in early December. Seattle columnist Art Thiel wrote of Russell Wilson in November, “He’s a perambulating think-positive seminar, a human Hallmark card, a motivational steamroller.”

Former Major League pitcher Jim Beattie ’76, who played baseball with Harry B. Wilson, says he hears glowing reports from friends in Seattle about Russell’s community service and weekly visits to the local children’s hospital. “He’s a very solid kid, and I wouldn’t expect anything different from that family,” says Beattie. “They were just solid citizens. Harry was a talented guy who was a hard worker.”

“Every Sunday Dartmouth players of that era root for their favorite team and the Seattle Seahawks,” says GE Chairman and CEO Jeff Immelt ’78, a Dartmouth Trustee and one of Harry’s football teammates. “I have never met Russell, but he acts like his father’s son. Harry is remembered affectionately by all of his teammates. He was a great guy and a talented receiver. He was quick to smile, but a tough competitor. We were all saddened by his death.”

A split end, in 1976 Wilson was First Team All-Ivy and broke a 23-year-old Big Green record for receiving yards, despite playing the final two games of the season with a separated shoulder. “Harry got hurt during the Brown game and couldn’t even raise his arm,” says Jimmie Lee Solomon ’78, a fellow receiver. “But he played the rest of the season. Harry was a tough kid, and was mentally very strong.” 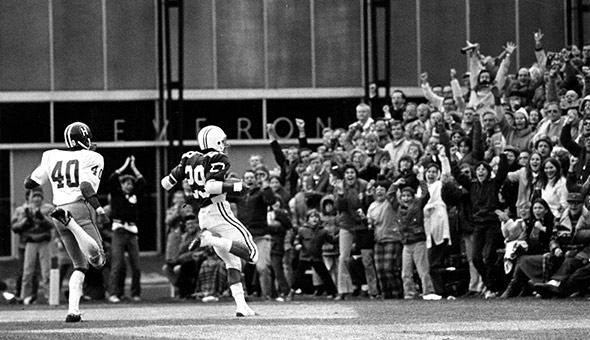 Harry B. Wilson ’77 (No. 29) catches a touchdown pass against Harvard at home on Memorial Field in 1976. (Photo courtesy of Dartmouth Athletics)

Dartmouth Football Head Coach Buddy Teevens ’79, a former Big Green quarterback who coached Russell Wilson as a teenager at the Manning Passing Academy, calls Harry “a tremendous receiver” and a great teammate who was always upbeat and encouraging. “He’d be one of the first guys out on the field at practice and one of the last guys to leave, and he’d be willing to go through some routes and progressions with me. That was sometimes unusual for an older guy to take that type of time with younger guys like me, but that was Harry.”

As a baseball player, Wilson was known more for his defensive skills at shortstop and third base than he was for his batting. Todd Morris ’76, the team’s captain and catcher, says with a laugh, “I led the team in strikeouts that year and Harry was a close second. We batted 7th and 8th, so we spent a lot of time consoling each other on the way back from the plate.”

A history major, Wilson took two history classes with President Emeritus James E. Wright, who says it was a “pleasure to have him in the classroom.” Wilson also completed an independent study project entitled “The Jigsaw Puzzle: Desegregation in Boston,” as one of 10 Dartmouth Senior Fellows. Sociology Professor Emeritus Raymond L. Hall, who became a good friend of Wilson’s, says he was “serious on the one hand, but fun loving on the other. He was also a bit of a closet geek. He was always well prepared, and a good student in addition to being a first-class gentleman. His fellow students had great respect for him. It was very difficult not to like Harry B. He was just a terrific young man.”

While he dreamed of a professional football career, Wilson went straight to the University of Virginia School of Law after graduation, where he was elected president of his class. His brother John, who also played football at Dartmouth, says Harry wanted to give his shoulder time to heal before trying to walk on to an NFL team. “And our father (Harrison B. Wilson Jr., the president of Norfolk State University) always believed in academics first,” says John, a consultant in Maryland. “But Harry worked out during those three years, so the time went by very quickly.”

Following law school graduation in 1980, Wilson got a tryout with the San Diego Chargers. As he joked in an article in UVA Lawyer, “I jumped from the Harlem Rednecks (a team in the Charlottesville flag football league) to the NFL.” That summer, he competed for a wide receiver spot with future NFL greats John Jefferson and Kellen Winslow, who nicknamed him “The Professor.” Wilson caught a touchdown pass in a pre-season game against the San Francisco 49ers, but was ultimately the last player cut prior to the regular season. Wilson told UVA Lawyer that the catch was like “someone giving me my wish to play out there.”

Benjamin Wilson, who has a framed photo of that touchdown grab in his Beveridge & Diamond P.C. office in Washington, D.C., says, “It meant a great deal to him. Harry had a remarkable pre-season. Back then they only had a 39-man roster, compared to 53 now. So he would’ve made the team today.”

Following his brief foray into the NFL, Wilson began practicing law in Procter & Gamble’s legal department in Cincinnati, near his former Dartmouth teammate Reggie Williams ’76, a Cincinnati Bengals linebacker. But Wilson was eager to try cases, so in 1990 he moved to the firm McGuire, Woods in Richmond, Va., where he and his wife Tammy raised Harrison IV, Russell, and Anna.

Harrison Wilson IV, who as a high school senior made a football recruiting visit to Dartmouth, “when there was snow up to my waist in January,” decided to stay in the South and played football and baseball at the University of Richmond. Now a regional manager for a pharmaceutical sales company, he says his father “loved Dartmouth College. He bled Green through and through and had a lot of pride about his time there.” Asked if his father talked much about his undergraduate days, Harry IV says, “When did he not talk about his playing days at Dartmouth! He had this green cassette that was his Dartmouth highlight tape. It seemed like we watched it once a week. The narrator had a distinctive voice, and we would recite what he said. ‘Harry Wilson with the catch!’ ”

Wilson shared his love of athletics with his children, and woke the boys up early to throw passes in the backyard before school. Academics were strongly stressed, and all three children attended the Collegiate School in Richmond, where Anna is a sophomore and a basketball standout (she has already committed to play for Stanford). “It started with hard work, and they were expected to excel academically and to study hard,” says Ben Wilson. “That was pretty firm. You weren’t going to play if you didn’t do well in school.”

Wilson saw Russell go on to play football and baseball at North Carolina State University, but landed in the hospital in April 2008 with complications from the diabetes that first struck him in 1985. Reggie Williams was in a New York hospital at that same time, battling to save his leg after being diagnosed with the bone infection osteomyelitis.

“Harry B. had just had his leg amputated and he calls me at the hospital in New York, where I’m on amputation watch, and we’re having this conversation about our legs,” says Williams. “This tells you the kind of person Harry B. Wilson was. He just had his leg cut off and he’s calling me to inspire me in the hospital. He was just a caring soul. He gave me all the advice I’d have to think about, proactively. And that is the biggest part of my fight to save my leg. I promised him that I would keep my leg.”

Wilson died on June 9, 2010, one day after Russell was drafted by the Colorado Rockies of Major League Baseball. He had lived long enough to know that his son would have a shot at a pro sports career. The 5’11” Russell seemed like a better baseball prospect, and the Texas Rangers validated that by trading for his rights a few weeks ago. But after being drafted as the 75th pick overall by the Seahawks in 2012, Russell has gone from a presumed NFL backup during pre-season to a starter from day one of the regular season. In just two seasons, the 25-year-old has won 75 percent of his games, and was the 2012 Pepsi NFL Rookie of the Year and a 2013 Pro Bowl selection.

“Harry was very proud of Russell and would be extremely proud of him today,” says Ben Wilson. “It’s not just that Russell is succeeding, but it is how he is succeeding. Harry taught Russell to respect the game, to respect his opponents, to play fair, and to win graciously and to lose graciously.

“But Harry had these wonderful dreams for all of his children, not just in athletics but in regard to their education. And they have all succeeded in their own way. Someone has to dream a dream for you. And Harry had dreams for his children and for Russell. And Russell is living out this dream.”