Will Geoghegan ’14 broke the Dartmouth and Ivy League indoor records for the mile running 3:58.04 at Boston University’s Terrier Invitational on Saturday, January 25.

Geoghegan broke the 20-year-old Dartmouth record of 4:02.26 set by Sam Wilbur ’94, in 1994. A computer science major from Brunswick, Maine, Geoghegan now also has the fastest time in the nation this season. 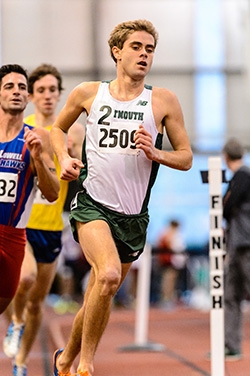 Will Geoghegan ’14 ran the mile in 3:58.04 at Boston University’s Terrier Invitational on January 25. (Photo by Doug Austin)

At the same Boston meet, teammate Abbey D’Agostino ’14 broke her own Dartmouth record as well as the Ivy League record with a mile time of 4:28.03.

Geoghegan became only the second Dartmouth student-athlete since Ben True ’08 to break a four-minute mile. During his undergraduate career, True ran a 3:59.99 mile during the outdoor season.

At the NCAA Cross Country Championship in November, Geoghegan was the Big Green’s top finisher and earned All-America honors, finishing 14th with a time of 30:22.1.