That box of chocolates, candlelight dinner, and Valentine’s Day card from the nearby pharmacy is looking like a pretty good investment, according to some of Professor David Blanchflower’s economics students. 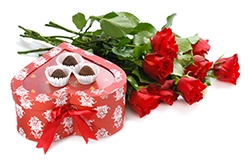 “As some of us prepare to buy flowers for a loved one, we can take solace in the knowledge that it is money well spent,” say economics students Emily Eisner ’14 and Simon Zhang ’14. (Photo by Shutterstock)

Blanchflower, the Bruce V. Rauner Professor of Economics, set his students on a search for happiness in the data forest of the federal Center for Disease Control’s Behavioral Risk Factor Surveillance System. They returned to say married people, regardless of age, gender, or race, are happier than their cohabitating, divorced, or single counterparts.

Emily Eisner ’14 and Simon Zhang ’14 write that 54 percent of married people say they are very satisfied with their lives compared with 40 percent of couples living together, 34 percent of divorced people, and 34 percent of those who have never been married.

While the data don’t imply cause—does marriage make people happy or are happy people more likely to get married?—it does reveal interesting trends, “such as the fact that widows tend to be happier than divorcees and those who are separated, while people living with a partner but unmarried are only as happy as widows.”

Eisner and Zhang conclude: “So, as some of us prepare to buy flowers for a loved one, we can take solace in the knowledge that it is money well spent. And hopefully that box of chocolates could lead to something more.”